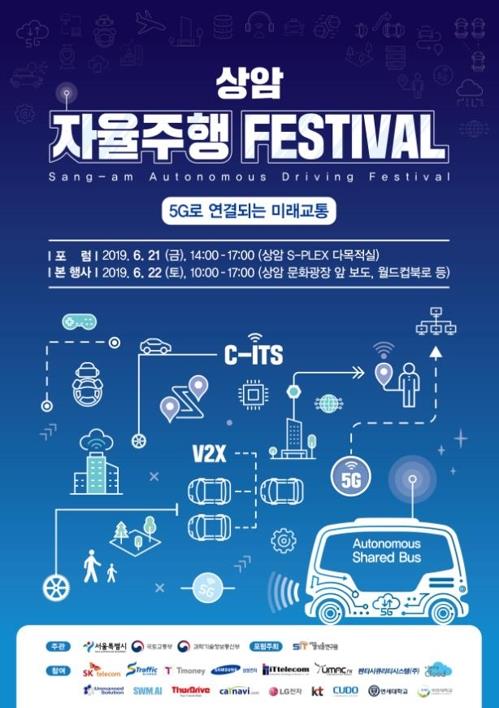 (SEOUL=Yonhap News) South Korea said Thursday it will set up the world's first 5G-based autonomous car driving test bed in the capital city as it strives to take the lead in future mobility technology.

The Sangam test bed in western Seoul, to officially open Saturday, will have all the necessary infrastructure, such as a recharging station for electric vehicles (EVs), 3-D detailed maps of the road and a "future mobility center" that will act as the overall control tower, according to the Ministry of Science and ICT.

The test bed, to be fully opened to the public and be operated 24 hours a day, will be used to conduct and test so-called Cooperative-Intelligent Transport Systems (C-ITS) services based of 5G network communication.

5G is the latest wireless communication network capable of super fast connection speeds, low latency and the ability to connect many devices without the system bogging down. The network, coupled with detailed 3-D images and maps of streets and related software, can make it possible for vehicles to be driven without human input.

Asia's fourth-largest economy was the first country in the world to launch full-fledged 5G services on April 3 and plans to provide coverage to neighborhoods in 85 cities that can benefit 93 percent of the population by the end of 2019.

The ministry said seven vehicles -- four buses and three passenger cars -- will be operated on the 1.1-kilometer testing road, and citizens will be allowed to ride in the vehicles so they can see for themselves the ability of self-driving cars to recognize traffic signals, avoid obstacles on the road and ferry people safely from one place to another.

While the country already has an operational test bed for autonomous cars in Hwaseong, some 60 kilometers south of the capital city, it is not open to the public, and is restricted for vehicle testing and certifications.