The so-called geopolitical risk has been the most haunting hazard on the Korea peninsula for more than six decades since the end of the Korean War. It was notoriously difficult to substantiate it and had made many insiders and outsiders hesitate to devote themselves in economic engagements on the peninsula.

At first, there was the ideological confrontation between the North and South, then a severe military tug of war, finally followed by a nuclear threat when everything else did not work out favorably for the North. Indeed, this threat existing since the 1990s has been a prime hazard not just to South Korea but to the entire world. That is why the UN Security Council has warned and imposed numerous sanctions against provocations by the North for more than two decades. There was constant psychological as well as physical fear of attack by the North, which steered potential investors away from South Korea. Of course there had been periods of friendly denuclearization negotiations between the two Koreas, but in essence, they had been nothing more than a disguised break.

However, the dark and thick cloud of confrontation surrounding the peninsula for more than sixty years is finally beginning to clear. The South Korean government not only initiated a “summit talk” between the two Koreas but successfully mediated the arrangement of a meeting between the U.S. President and North Korea’s leader by utilizing the PyeongChang Winter Olympic Games. President Moon of South Korea will meet Chairman Kim Jong-un in late April this year, and then President Trump will have a face-to-face meeting with Mr. Kim at some point later on. It is uncertain what agendas will be brought to the table by each party let alone on how the results of these two historical meetings will come to be.

Of course, the three key players are yearning for quite disparate wishes. It is now very clear that the U.S. will want denuclearization under the CVID princi ple, referring to the complete, verifiable, irreversible dismantlement of nuclear arms. However, the North is very unlikely to denuclearize unless there is CVIG, or complete, verifiable, irreversible guarantee of the regime. Therefore, a crash of the two mutually contradictory principles of CVID and CVIG can be expected in the meeting between the U.S. and North Korea. While their stances are quite conflicting and centered on the issue of denuclearization, South Korea’s position, especially under President Moon’s government, is slightly different, as it seeks a peacefully unified and cooperating peninsula. It puts more emphasis on collaboration and communication between the two Koreas rather than on the military issues.

At the end of the day, The U.S. government seems to identify trade issues with national security, and consequently, with military concerns. To the U.S., the North-South economic cooperation that the Moon administration is constantly aiming for cannot be detached from the military issue regarding defense of the peninsula. Indeed, confrontation between countries including the U.S., China, North Korea, Russia and Japan is the last thing that the Moon administration wants. In short, the entangled Gordian knots between the U.S. and the two Koreas are so complicated, intricate, and complex that it is too premature and precarious to predict what the outcome will be.

And yet, there are strong signals that a dawn of hope of a nuke-free peninsula is about to break. There are a number of signs to believe so. First, North Korea’s economic and social environment is directing its leadership towards an increasingly open attitude, especially toward the U.S. Additionally, economic sanctions have definitely been presenting perverse effects on lives of the North Korean people, bringing high inflation, frequent resource shortages, illegal smuggling and corruption. Mounting pressure and antagonism from the inside is very difficult to repel for such a young and western educated leader like Mr. Kim Jong-un. It is not clear whether the North will entirely dismantle nuclear arsenals to gain an economic lift, but this cannot be factored out completely. Second, for the first time in history, the U.S. President will have a face-to-face meeting with the North Korean leader. Perhaps as unpredictable as the two leaders are, nobody can outright dispel the possibility of an unbelievably positive result between the two. Even without dramatic outcomes, the meeting itself deserves much credit. Third, the tension-filled inter-Korean relations has dramatically improved under President Moon’s leadership. Of course there has been severe criticism about his efforts in bringing North Korea into the dialogues, but the meeting with Mr. Kim Jong-un, is regarded by many as the beginning of belated but true detente on the peninsula.

It may not be a chaotic reunification like Vietnam in 1975, nor as dramatic as Germany in 1990, but many have high hopes that we are one stop closer to a peaceful reunification of the peninsula due to the summit talks. Considering the complexities of the decades-long tension that exists between the U.S. and South Korea on one side and the North on the other, it is more than worthwhile to give the talks a chance and dream of the dawning of nuke-free peace on the peninsula. 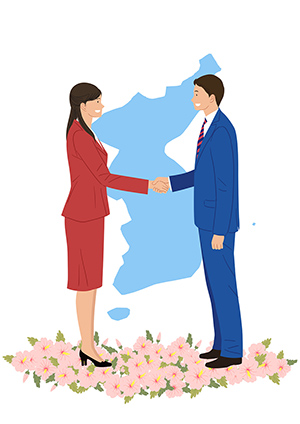