(JEJU ISLAND=Yonhap News) South Korean and Japanese regional governments across a sea passage between the two neighboring countries are set to hold a three-day conference this week on South Korea's largest island of Jeju to discuss ways to develop the fishery industry, Jeju officials said Tuesday.

About 40 fishery officials from eight regional governments will attend the conference that starts Wednesday. The eight, which are located around the Korea Straits, comprise South Korea's Jeju, South Jeolla, South Gyeongsang and Busan, and Japan's Fukuoka, Saga, Nagasaki and Yamaguchi prefectures.

The participants are scheduled to release 3,000 fries of pufferfish into waters north of the Jeju port at 10:00 a.m. Thursday before exchanging marine and fishery information of the two nations and announcing a list of joint research subjects.

Agenda items at the conference include preservation of the sea bream; the sixth industrialization of the fishery sector, or the integration of primary, secondary and tertiary industries as part of efforts to spur growth; and technologies for tideland fishery farming.

The fishery conference has been held annually among the eight members since 1993, one year after leaders of the eight regional governments agreed to regularize it during their meeting on the South Korean island.

Separately, the Jeju municipality plans to invite a group of Japanese fishermen to a meeting with Jeju fishermen next month to promote exchanges and cooperation between the fishermen of the two regions. 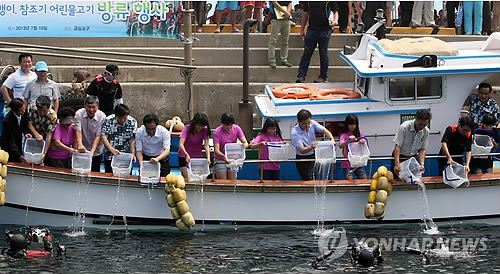 This file photo, dated July 19, 2013, shows participants releasing fries of the yellow corvina and other fish into waters near the city of Jeju on South Korea's largest island of the same name as part of efforts to increase fishery resources. (Yonhap)