(SEOUL=Yonhap News) Chinese electric vehicle maker BYD Co. has set up a corporate body in South Korea, according to a court document Tuesday, heralding its full-fledged operation in the country in the near future.

BYD Co. set up BYD Korea Co. Ltd. on Oct. 25, with the office headquartered on the southern resort island of Jeju, the document by the Supreme Court showed. 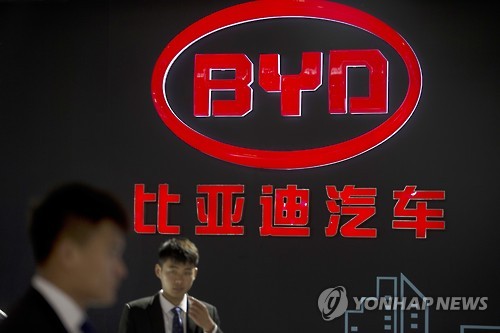 BYD has been seeking to expand its presence in South Korea through a business partnership. The Chinese EV maker is also seeking to sell its cars at various dealers here, industry sources said.

The Shenzhen-based BYD, which is backed by Warren Buffett's Berkshire Hathaway Inc., began its business as a battery manufacturer but now has a wide business portfolio ranging from EVs to handset parts.

The company emerged as the world's No. 1 EV maker by selling over 60,000 electric vehicles last year, beating U.S.-based Tesla and Japanese automaker Nissan.