(JEJU=Yonhap News) Acting President and Prime Minister Hwang Kyo-ahn on Monday renewed his vow to revitalize the local tourism industry hit by China's ban on group tours to South Korea in retaliation for the installation of a U.S. missile defense system on the peninsula.

During a ceremony commemorating the victims of a 1948 government-civilian clash, Hwang said the government will push to attract more tourists from countries other than China and encourage more Koreans to use domestic tour programs.

"We will ensure our civilian-government cooperation to turn (the current situation) into an opportunity for our tourism industry to achieve more qualitative growth," Hwang said during the ceremony on the southern resort island of Jeju. 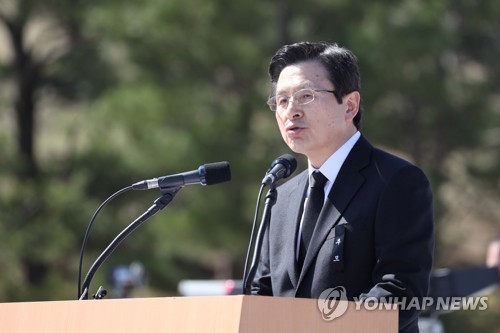 Acting President and Prime Minister Hwang Kyo-ahn speaks during a ceremony commemorating the victims of a 1948 government-civilian clash on the southern resort island of Jeju on April 3, 2017. (Yonhap)

The acting president added that the government will redouble its efforts to enhance the tourism infrastructure on the island.

In a response to the ongoing deployment of a Terminal High Altitude Area Defense (THAAD) battery to South Korea, China has taken a series of retaliatory steps against South Korean businesses and entertainers, including its ban on group tour packages to the country.

China claims that THAAD's powerful radar could be used to spy on its military and undermine its strategic security interests. South Korea and the United States argue that THAAD is defensive in nature and will only target North Korea.

Touching on the 1948 incident, the spirits of reconciliation and harmony Jeju islanders have shown since the deadly clash are what today's South Korea needs to overcome its social and political divisions.

"The best way to overcome the crisis situation is mustering up our national capabilities through unity and integration," Hwang said, apparently referring to the leadership crisis triggered by the recent ouster of former President Park Geun-hye over a corruption scandal.

In the so-called April 3 Incident, tens of thousands of Jeju natives were killed due to the government crackdown on the protesters that criticized the rule of the U.S. military government and separate elections in the South, which they said would perpetuate the national division.

After its liberation from Japan's 1910-45 colonial rule, the Korean Peninsula was divided into the U.S. military-controlled South and the Soviet Union-backed communist North.

It took more than a half-century for South Korea to officially investigate the uprising and recognize the victims that were initially labeled as communists.