(JEJU=Yonhap News) Jeju Island will host some 5,000 incentive tourists from Vietnam as part of an agreement reached with the five travel agencies in the Southeast Asian country, regional authorities said Sunday.

The Jeju Tourism Organization, Jeju Convention and Visitors Bureau and the Korea Tourism Organization (KTO) said a memorandum was inked in Ho Chi Minh City last week with representatives from such agencies as Viettravel and Saigon Tourist to promote visits.

Incentives tourists refer to people who are treated to a paid holiday as a reward from the company he or she works for by meeting growth targets or tasks.

Under the pact, Vietnam's travel agencies will send around 100 incentive traveler groups per year to South Korea's resort island that can greatly contribute to Jeju's tourism industry.

The island, off the southern coast of South Korea, has become a favorite attraction for many travelers, but the diplomatic row with China over Seoul's decision to install an advanced anti-missile defense system on its soil has seriously affected the inflow of Chinese visitors.

"Vietnam is growing at a brisk pace and has great potential in terms of outbound travelers," said an official from the Jeju provincial government, who played a role in facilitating the latest deal. He said that the agreement will not only promote visits by incentive travelers but those coming on individual and group trips down the line.

Jeju tourism authorities said that besides Vietnam it will seek to attract more visitors from places like Taiwan, Singapore and Malaysia by strengthening marketing efforts. 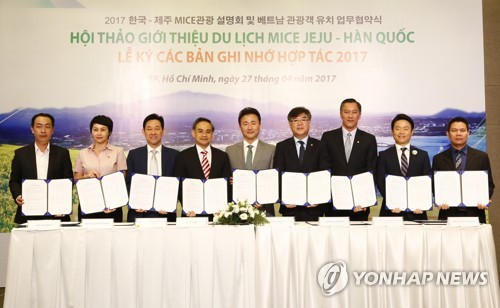