(SEOUL=Yonhap News) Hotel Shilla Co. won the right to operate a duty-free shop at an airport on Korea's southern resort island of Jeju, customs officials said Wednesday, amid growing hopes for the return of Chinese tourists.

The operator of Shilla Duty Free was tapped to operate the outlet at Jeju International Airport for five years, beating its domestic rivals Lotte Duty Free and Shinsegae DF, according to the Korea Customs Service.

The bidding came as Hanwha Galleria, a retail unit of Hanwha Group, decided to end its duty-free business at the airport due to a sharp drop in the number of Chinese tourists.

Last month, China partially lifted the ban as Seoul and Beijing agreed to put their bilateral relationship back on the "normal track."

Last year, Chinese nationals accounted for nearly half of the 17 million foreigners who visited Korea.

Separately, the customs authorities approved Lotte's bid to renew the license to run its duty-free store at the Convention and Exhibition Center in southern Seoul which it opened in 2010.

No other retailers took part in the bidding, apparent due to fierce competition in the affluent Gangnam district in the capital. Two other duty-free shops, operated by Hyundai Department Store and Shinsegae, are set to open in the coming years. 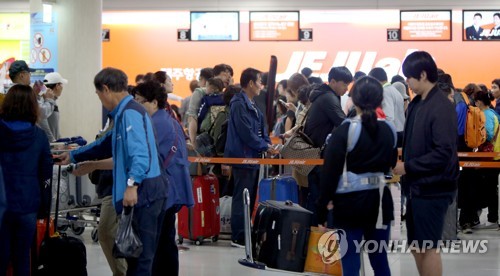 This file photo, taken on Oct. 6, 2017, shows Jeju International Airport, located on South Korea's southern most resort island of Jeju, flooded with travelers as they go on a long break for the Chuseok (harvest moon) holiday. (Yonhap)