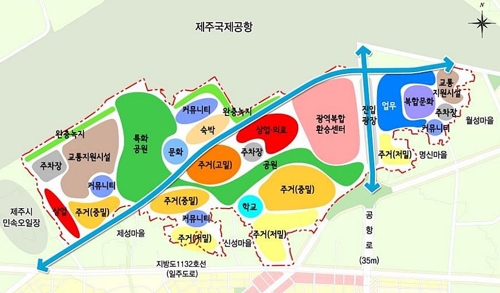 (JEJU=Yonhap News) The concept idea has been drawn up for the large-scale urban development project near Jeju International Airport, and it includes a wide-area complex transfer center as well as cultural, housing and business facilities.

Jeju announced on November 11 that it will announce the development plan and basic construction plan for the area near the airport and will start the development project in 2019, after collecting opinions from citizens.

The province suggested "JEJU WELCOME CITY" as the concept of the development project so everyone feels welcomed in the gateway, complex and self-sufficient city of Jeju.

The city plans to act as a gateway city that is linked to the wide-area complex transfer center. It will also be a mixed living space that integrates residential, commercial, cultural and public areas that will be fostered as a new growth base by attracting knowledge-based industries. The detailed plan shows that there is a wide-area complex transfer center on the west side of the airport entrance, and commercial, medical, lodging, specialty parks and transportation support facilities in the vicinity.

A total of 5,000 households (20 ~ 33 floors), medium density (less than 20 floors) residential areas and schools will be built, and a complex cultural and business support facility will be built to the east of the airport entrance road.

In conjunction with the airport ramp, a 50m-wide entrance plaza will be created for residents and tourists, and a specialized park will be built around Heulcheon, a large-scale cultural, ecological and relaxation resort.

The province plans to introduce the concept of a smart city, low carbon green ecological city, crime prevention through environmental design (CPTED) and a universal design for the safe and convenient use of residential other facilities by everyone.

The plans also include advanced concepts such as low impact development (LID) and intelligent transportation systems (ITS) as part of the urban development.

The province will open the basic plan to residents until July 31, so residents can voice their opinions. It will also hold ann information session and public hearing.

Afterwards, the province will finalize the plan by October, then officially start the urban development project in 2019.