Toward a Bigger World: Rising Hope in a wasteland of pharmaceutical manufacturing
Date
2022.01.06
Views
172

A revolutionary growth needs strong enough motivation. The motivation could come through long-standing efforts or an unexpected discovery. But, the most dramatic occasion will be who you encounter, just like how BMI Korea met Jeju Island.

Jeju Island where everything should be new

BMI Korea was established through its acquisition of a factory located in a pharmaceutical complex in Gyenggi-do in 2005. Today, the pharmaceutical manufacturer is seeing solid growth from producing the Hirax Injection, a high purity liquid used to prevent swelling caused by surgical operations, helping patients recover faster.

However, there were a lot of difficulties at the start of the growth. Among them were GMP facility requirements to satisfy the Pharmaceutical Inspection Co-operation Scheme (PIC/S). Recalling the time, Hur Yong-Gu, director of BMI Korea, said that “It became more complex to build GMP facilities that meet PIC/S standards at a time when production started not long ago. The factory we acquired attained GMP certification issued by the Ministry of Food and Drug Safety, but it needed a massive repair to satisfy the PIC/S.”

GMP is a set of standards for manufacturing excellent foods and medical supplies to ensure safety and quality of effectiveness. To fulfill the criteria, there are quite a lot of elements to manage. Therefore, strict quality management is required in every process, from the warehousing of materials to delivering finished products, along with the highest-level process management.

“We needed to modify and complement all the outdated facilities and systems and deploy new ones. But a company that was just starting out couldn’t afford it. So then, we reached a consensus on finding a local government that provides support for new businesses to build facilities.” So, we met with a lot of local governments, and it was Jeju Island that presented the most attractive offer. At that time, Jeju was striving to attract biotech companies. That was how a firm and a local government, both looking for a new opportunity, met when they needed each other the most.

The Decision to Leap, and the Challenge of Growth

What decisively made BMI Korea choose Jeju Island was the clear and fresh image associated with the island, and various startup support programs promised by the Island and the Korea Development Bank.

“In fact, the environment has little impact on pharmaceutical manufacturing. What is critical is an environment thoroughly isolated from the outside. But, for a company that started to promote itself, utilizing the image of Jeju was very important. In particular, there was no pharmaceutical company in the Island yet, giving us a great advantage to spearhead the market.”

But that didn’t come without pain. “Spearheading the market means there is not enough infrastructure. We faced the first struggle while building facilities that fulfill the PIC/S standards for GMP certification. We needed to bring in professional employees and offer various support during their stay in Jeju. This issue was not a big burden thanks to the active cooperation of the Island. A bigger problem came from geographical factors. You can reach the island only by flight or ship, which causes us to sometimes fail to send or receive the needed personnel and materials when too many visitors are flocking or when weather conditions go worse. As a result, it has become a natural thing for BMI Korea to always be prepared for just-in-case scenarios.”

An area where the company still feels shortcomings is infrastructure. In Jeju island, once a barren land of pharmaceutical manufacturing, a logistics firm suggested a price much higher than in the capital area. “But this issue can be resolved at any time,“ said Director Hur Yong-gu. In fact, he said that BMI Korea has maintained amicable relationships with diverse business partners through reasonable deals within the island. Still, there are some issues unlikely to be resolved soon.

“It is not easy to make up a group of qualified workers. Due to the nature of the industry, we need to constantly learn new things, which is difficult in Jeju island. The same goes for the workforce in charge of product production. We had to make a lot of effort to promote our company while visiting many universities to attract employees who can meet our standards.”

Director Hur Yong-Gu smiled, saying that hope is growing. He thinks that they will be able to recruit professional employees once Jeju National University College of Pharmacy is established. 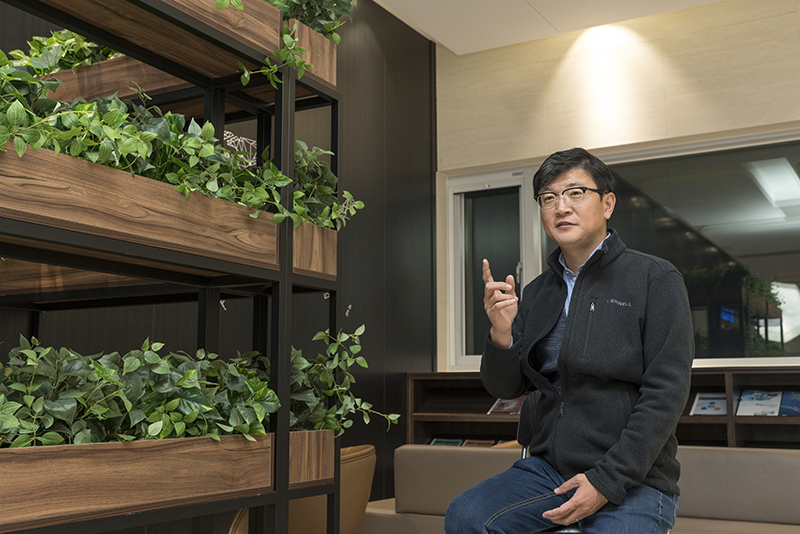 Director Hur Yong-Gu in an interview

A new roadmap is drawn in Jeju

BMI Korea has been showing rapid growth since 2016, making it desire new employees.

“We have been continuously growing since we moved to Jeju in 2010. Also, we set the goal of reaching the first stage of making a copy drug, the second stage of producing an improved new drug that requires technological prowess, and the third stage of solidifying our status by developing biologics and complex medicines, and we are confident that we have almost reached it.”

According to Director Hur, Hirax Injection, a high purity liquid that dramatically improved usability with few side effects, has been well-received in the market. It is a product produced in a new facility built on supports from various organizations, including Jeju island. Sales are rapidly growing, reaching KRW 10 billion in 2010, KRW 43 billion in 2017, and over KRW 60 billion in 2021, with its aim to reach KRW 100 billion in 2025. BMI Korea plans to take the plunge into developing diverse products with a much higher added-value in the future.

BMI Korea is working on expanding its global footprint by attending international pharmaceutical exhibitions every year. What is the vision of those who are gradually moving towards a broader stage?

“As we just started as a small pharmaceutical manufacturer, we don’t have a grandiose vision. Our biggest vision is to make a workplace where all members faithfully fulfill their duties so that everyone can be happy. If that happens, wouldn’t we be able to leave behind meaningful traces as a pharmaceutical company?”

BMI Korea has steadily grown since its start in Jeju