There is a three-story building with a clear ocean view. It's called "O-PEACE JEJU," which lately attracts digital nomads who aren't bound by physical spaces but instead pursue digital freedom.
However, this place doesn't look like an office at all. You can sit wherever you want and cook food with no restriction. It's okay to stand or lay down. It is a place of freedom where you can work as you wish in front of a majestic ocean view.

Cities Consume Our Energy, While Jeju Restores it

Severe traffic jams turn roads into parking lots during rush hours, and public transportation is jammed with crowds, and it always seems as if there is an endless amount of work. Wherever you live, every office worker has a time when reality hits you hard. Park Seong-Eun, the CEO of O-PEACE JEJU, has also experienced it.

"I ran an architectural firm in Seoul, and I had severe burnout during those 4 years. I couldn't do anything when I finally got home from work because it took 3 hours to commute every day."

That was the time when Mr. Park thought of Jeju island. Jeju, his wife's hometown, was the place where he could relax his exhausted mind. At that time, there was a job opening for a professional architect as a public official. That's how he came to work at the provincial government. His mind and body have become more relaxed ever since, and his attitude towards life has changed. The biggest change was the quality of time. Traffic jams disappeared from his life, and he could spend a longer time with his family. He could travel to any oreum (a small, defunct volcano) or any beaches on Jeju island.

As his mind became more relaxed, his dreams grew more significant. When Mr. Park ran his architectural firm, he used to design and build co-working spaces from small-sized offices to huge ones sized 400 to 500 pyeong (Korean unit of area and floor space, equal to 400/121 square meters) for startups. It was the time when he thought about free working space.

"There is a holy place for digital nomads in Hubud, Bali, Indonesia. I imagined the idea of making the same place in Korea once. Since I moved to Jeju island, I forgot all about it, but i was reminded again, and my desire to create it became bigger every day. That is why I started to make a co-working space with the help of the "Pre-startup Package Project" of the Ministry of SMEs and Startups."

A Vacation Resort Based Co-working Space in Jocheon

O-PEACE JEJU, which opened in Jocheon-eup, Jeju-si, in November 2019, is a co-working space based on vacational spots. The first floor of the three-story building is a working space consisting of split-levels and divided into opened space and more private parts. It is a small but well-furnished room with everything you need, including a relaxing space with easy chairs, booths to have meetings or calls, and a kitchen to cook simple food. The second and third floors are for accommodation so anyone could use them with a reservation.

From design to construction when building O-PEACE JEJU, Mr. Park's main focus was to create "a place where you can relax." Unlike most of the large-scale co-working spaces, building the space was lagging behind in terms of funds and accessibility. So, he wanted to create a space where you could let go of all tension and feel at ease.

"I had co-working space tours in Seoul before I designed O-PEACE JEJU, but places like WeWork were so fancy and trendy. It made us feel like we needed to be the same to work there (laugh). That's why I planned to pursue the opposite, building a relaxing and comforting one."

O-PEACE JEJU opened in November 2019 with differentiated strategies, but soon after, COVID-19 spread throughout the world. There were days when O-PEACE JEJU had zero customers. However, crisis turns into opportunities. The pandemic started to vitalize remote working, and Jeju island became the center of the spotlight for "worcation (work+vacation)." People realized that they no longer needed to be stuck in their offices. They started to gather in O-PEACE JEJU along with the popularity of Airbnb.

The young CEO doesn't think of O-PEACE JEJU as a simple co-working space. He plans to create a worcation town starting from here.

"The users of O-PEACE JEJU have to find places to eat, and they also want to visit shops around the town. Since I've started my business here in Jocheon, I wanted to connect my co-working space with the local community for mutual prosperity. I would be able to introduce souvenir shops and restaurants in town and help local creators boost sales. Just like this, I wanted to make the community a more enjoyable place.

His journey to create the worcation town has already begun. He is already introducing delicious restaurants and cafes that he has visited to the users of his service and is displaying works of local photographers at residual spaces. We can feel Mr. Park's affection for the town when he says, "Jocheon is a small town compared to others, but it has a lot of things to see and do in each and every corner of it."

The young CEO is currently planning to build worcation houses for long-term rent and workshop spaces for corporates or large groups of people. He said he hopes people who visit his co-working space feel peace of mind.

"We consider ourselves as an intermediary that delivers peace through Jeju island. If you feel chaotic and no peace in cities, please visit the island, and I hope you can enjoy the tranquility." 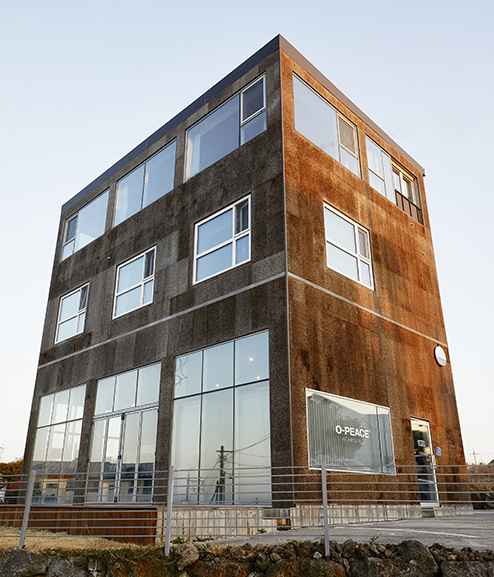 O-PEACE JEJU with huge windows to the ocean