Many media outlets, such as broadcasting, publishing, or advertising, are fond of Jeju island. Jeju draws people's attention for its unique environment in Korea. As a result, a film entertainment institution was recently established here in Jeju – the Jeju Contents Agency. We visited Jeju Contents Agency to find out what the institution does.

The following is a dialogue between Lee Youn-Sung, Lee Soo-Kyung, and Kim Ha-Seob of the Cultural Industry Team, Jeju Contents Agency 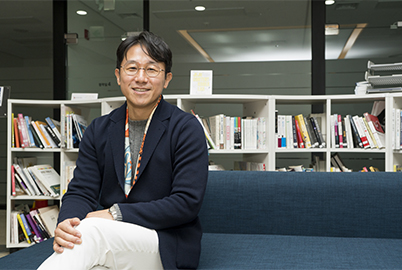 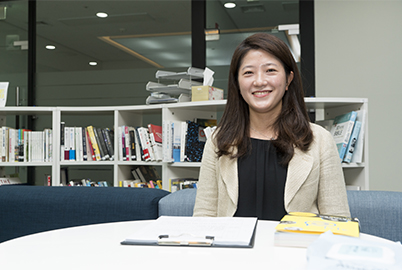 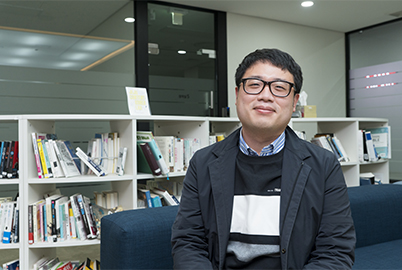 Q. How would you define the Jeju Contents Agency?

Youn-Sung : The Jeju Contents Agency was established in 2018 to support creators and enterprises in Jeju and engages in various activities to help create jobs relevant to the cultural industry. We are doing everything we can to advance the film entertainment industry associated with or in Jeju by gathering scattered support projects in one place.

Q. What is the status of Jeju's cultural content and film entertainment?

Soo-Kyung : The government issues a white paper every year that summarizes the status of the content industry, such as broadcasting, advertising, and publishing. Jeju covers 1.1% of the total revenue generated from the content industry nationwide, and people engaging in the sector amount to 0.9%. Only three provinces show a higher revenue share than the share of the people in the industry, which are Seoul, Gyeonggi, and Jeju.

Youn-Sung : If you look closely, it's not all sunshine and rainbows. More than 70% of the film entertainment entities are small businesses with five or fewer employees. The share of R&D resources that supports the industry in Jeju is only half of the national average, and the percentage of people who can create videos is only one-third of the national average. The agency is focusing on nurturing research professionals to address the resource shortage.

Q. What does the agency do to help the film entertainment industry?

Soo-Kyung : Jeju is often used as a backdrop of many works. Since the outbreak of COVID-19, the number of film cooperation requests has increased by 30% or more than the average. Moreover, since filming abroad became difficult, many have chosen Jeju as the place to film because its scenery is exotic. Jeju Contents Agency makes it easier for film crews that visit Jeju to produce without much difficulty. For example, the agency fills water in a water sprinkler tank truck to help make rain scenes, provide city bus, or build an indoor studio to create a filming-friendly environment so that Jeju's fickle weather doesn't affect the work.

Q. Can you tell us one of the most impressive projects run by Jeju Contents Agency?

Soo-Kyung : There was a case where the agency supported a project for creating Global Cultural Content. It was about creating immersive content using convergent technologies, and the final goal was to use AR to make LED robots dance. The project's final product was shown in a theme park in Jeju Island, and many tourists left positive comments about it. The profit generated from the project was reinvested to create a hologram musical out of popular animation. The musical also generated a handsome amount of revenue only from early reservations.

Q. What does the recent success mean to the agency?

Soo-Kyung : Many immersive experience contents have been created in Jeju so far. However, most of the production works are managed by companies in Seoul which build studios in Jeju only temporarily. Consequently, most of the added values leave Jeju. However, it is meaningful as all processes relevant to the project, from the planning stage to the actual performance, are operated in Jeju. The new content created from the project helps create a virtuous cycle. Other regions highlighted the case to be a new Regional Cultural Industry Model.

Q. What kind of support do you provide to individual creators?

Ha-Seob : We call the people who worked in the cultural industry and moved to Jeju cultural immigrants. Though it is unclear, the number of cultural immigrants in Jeju is known to be considerable. The immigrants often ask for our support before we propose. For instance, the agency provides capacity-building programs and matches those who completed the course with relevant positions in Jeju when people want to get a job here. The companies that hire people who went through the process are provided with up to 1.8 million won per month. 107 people got their jobs through the program so far, and 38% of the program graduates were cultural immigrants.
The agency has infrastructure and support programs to help people who want to open their own business or realize their ideas into prototypes. The agency also backs content creation or distribution when the created materials are appreciated by many.

Q. What kind of support does the agency provide?

Youn-Sung : Jeju is probably the best place for people who dream of being digital nomads. The agency rents filming and editing tools for free to the people who want to create content in Jeju. You can do everything from planning to editing at Content Korea Lab JEJU and green screen filming. In addition, ACA (Asia CGI Animation Center) in Seogwipo has a dubbing studio where real-time editing is possible. This institution has gained a lot of positive feedback from young people who create relevant content.

Q. Does the agency support creators who use Jeju as a source of creative content, not merely as a background?

Ha-Seob : The agency also supports creative businesses that use Jeju's culture. Recently, the agency collaborated with FILA to launch a product originating from Jeju's oreum (a small, defunct volcano) and mythology. This year, we held a competition whose theme is to express oreum in visual design with Kakao Corp. The contest was popular enough to get around 620 pieces registered. 5 top-notch works were selected out of the registered works, and they are to be launched as products soon. A new form of a musical that runs along with videos, XR Fantasy Musical Mysterious goddess class was also performed in Seoul, Gyeonggi, and other places. The agency supports content creators as long as the content is good. The theme does not have to be limited to something related to Jeju.

Youn-Sung : Budget is of the utmost importance. We are trying to host government-subsidized projects by working with various government departments and institutions to create jobs related to the film entertainment industry. Thanks to these efforts, the job creation budget allocated to the agency is increasing rapidly by 50% or more every year. Another main focus of the agency is on building infrastructure. Our target is to realize that Jeju is the best place to create content by securing professionals who can run video, music, and performance production facilities.

Q. What vision does Jeju Contents Agency have?

Ha-Seob : Many in Jeju do not realize that they can profit by being a content creator. We will show that the agency can help build a virtuous cycle where a company or individual profits from content creation. Then, the profit generated from content gets reinvested in the region to make a product with higher added values.

Soo-Kyung : Performance directors often say that it's regrettable that there is no decent place to perform in Jeju, but a concert hall is expected to be fully built shortly. We have high hopes for that place. As we believe immersive content is in rising demand, the agency will actively communicate with companies that help create immersive content.

Youn-Sung : Our ultimate goal is to help creators branch out to genres other than their content and link what they created with Jeju's tourist attractions to produce bigger and better results. The agency will endeavor to help creators combine their ideas with Jeju's blessed environment so that content enjoyable for everyone can create more added value to the province. 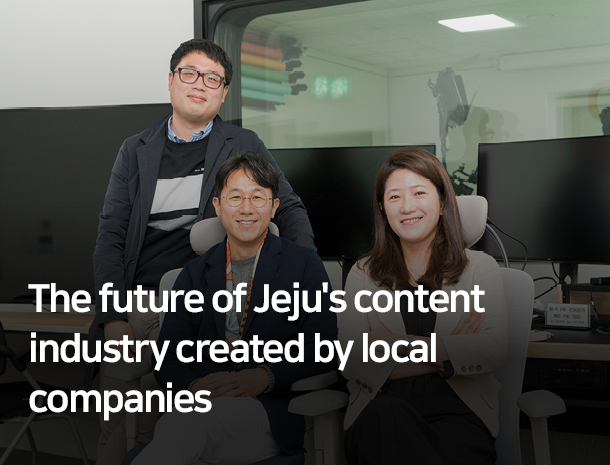