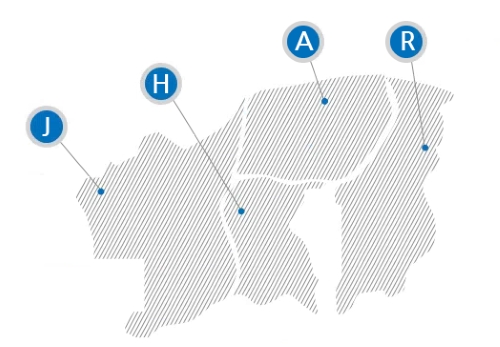 Jeju’s culture become a theme
Jeju is home to myths and legends that are unique to each village, valley, hilltop and shore. In order to utilize the island’s stories of some 18,000 deities, history of struggle, and other myths, legends and histories as tourism resources, JDC is pushing forward with the creation of the Jeju Myths and History Theme Park. Through the creation of a tourist destination that complies with the national government’s “Korea-type resort complex development” initiative and creates high added value, JDC is securing a bridgehead for enhancing the local tourism industry and securing international competitiveness.

Success on the 15th try: Korea’s largest FDI of USD 1 billion
After 14 failed attempts at attracting investment for the past 11 years, JDC finally succeeded in signing a memorandum of agreement for developing the A, R and H zones of the Jeju Myths and History Theme Park with Landing International Development Limited, known for its vast experience and expertise in real estate development, in August 2013, and saw to the establishment of Landing Jeju Development to be in direct charge of the project. Later a business agreement and land sales contract (KRW 136 billion) were signed, achieving a record amount of USD 1 billion in foreign direct investment, the largest amount for a single investment in the history of the Korean tourism industry.

Myths and History Park embraces the world
The resort complex combines recreational, shopping and convenience facilities based on the core themes of different myths, histories and cultures from Korea, Asia and Europe. When completed, it will cover approximately 1.2 million pyeong of land in Andeok-myeon, Seogwipo-si, and will be divided into the A, R, H, J zones. Landing Jeju Development’s Jeju Shinhwa World will take up the A, R and H zones, while Zone J will feature facilities based on the theme of the cultures of Jeju and Korea. The entire budget for the project is KRW 2.4129 trillion.

Model case of growing with the community, creating jobs
Striving to go beyond the success of the development project, JDC has focused its efforts on building a model for the mutual growth between the park and the local community. JDC signed an agreement to that effect with the local community (Seogwang-ri) and the investor (Landing Jeju Development), and has pushed for the preferential participation of local residents with regards to construction equipment, restaurants, and security guards. Also, for the construction stage, JDC made sure that over 50 percent of the original contracts were available to be signed with local companies, resulting in KRW 67.2 billion worth of orders being made to local construction firms. Moreover, JDC is pursuing various ways to push forward with the mutual growth initiative, resulting in the direct employment of some 5,000 persons for positions of which 80 percent was preferentially offered to local residents.

The future of Jeju Myths and History Park
Jeju Shinhwa World that covers Zones A, R and H have completed the first stage opening in October 2017, and plans to open the entire park in December 2018. In addition, Zone J, which is being developed by JDC, will be made into a space filled with creative and fresh content. Jeju Myths and History Park is set to bring revolutionary change to Jeju’s tourism industry, and will serve as a landmark that is recognizable across Asia, and far beyond in other parts of the world.