(CHUNGJU=Yonhap News) If you are in Chungju, 130 kilometers south of Seoul, don't be surprised when you encounter people performing martial arts on the streets, just like in Chinese kung fu movies. 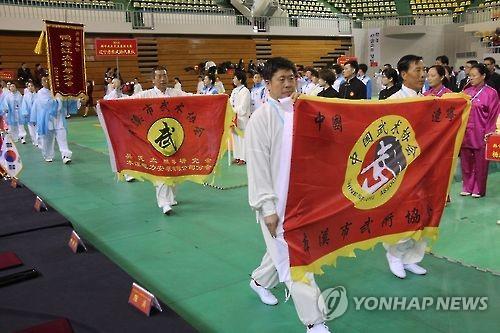 Chances are that they are actually martial arts practitioners from China.

There may be no kung fu stars like Bruce Lee or Jackie Chan, but this year, Chungju will be the place to feel the fever of Chinese martial arts in South Korea. Since last December, groups of 200 to 500 Chinese martial arts practitioners have been visiting Chungju to participate in an event called the "Korea-China Martial Arts Exchange Contest."

The city in North Chungcheong Province plans to invite a total of 5,000 Chinese tourists with a martial arts background this year to its contest. And it plans to host the martial arts event at least 20 times in 2016.

"I'm so happy to be here to show my performance," said Liu Xue Jiao, a 16-year-old girl who performed xing yi quan at the contest, through an interpreter. "I like K-pop, but the reason why I visited Korea is the martial arts."

It is no secret that South Korea has been luring Chinese tourists with the Korean Wave or "Hallyu," thanks to the rising popularity of K-pop, drama and movies. In recent years, the country has also seen Chinese tourists, also known as "youker," visiting South Korea for foods, cosmetics and medical treatments. Chungju decided to go with martial arts.

"If you ask Chinese people to just visit here, they are not going to come," said Chungju Mayor Cho Gil-hyeong. "In China, many people do martial arts as their daily exercise, so we decided to focus on that area."

Chungju has just the pedigree, as the home of the oldest Korean martial arts "taekgyeon."

The city is also home base for the International Centre of Martial Arts for Youth Development and Engagement (ICM), an institute under the United Nations Educational, Scientific and Cultural Organization (UNESCO).

With this background, providing a stage for Chinese tourists to showcase their martial arts skills was not a difficult choice, according to Cho. The city believes exploring this niche market of martial arts tourism will provide memorable experience to the visitors.

"We have assets of martial arts and we want to use them," Cho said. "We are trying to vitalize tourism where visitors can actually engage in activities they like."

Wang Zhen Dong, a vice chairman at Korea-China Development Association who recruited tourists in China for the event, said Chungju's martial arts tourism is getting people's attention in China. He added it was difficult to organize the schedule and manage the transportation for this martial arts tour because of high demand.

"So many people wanted to get actively involved when I talked about a South Korean tour with a martial arts event," he said through an interpreter. "I think Chinese people now know Chungju is the city for martial arts."

At the contest, Chinese participants perform their martial arts and medalists are determined from judges' scores. South Korean taekwondo and taekgyeon teams also showcase their skills during the contest.

Although the event doesn't feature top-class performers and has no combat between contestants, those who watched the performance last week said there are still things to learn in terms of martial arts exchange program.

"By looking at other martial arts, we can think about how to develop our moves," said Bak Man-yeop, executive vice president at the Korea Taekgyeon Association. "We can also let these visitors know the power of our traditional martial arts."

"We want this event to reinforce communication and friendship between South Korea and China," said Li Fei, the premier of Zhengzhou Wushu Association, through an interpreter. "This kind of cultural exchange program will further develop the relationship of our two countries."

While Chinese tourists enjoy performing martial arts, the task for city of Chungju is to make this inflow of visitors spur its tourism and economy of the region. Though Chinese tourists stay only two days in the city for the martial arts event, their spending in lodging and foods are helpful to local businesses here, the city officials said.

"Each of these Chinese tourists spends about 100,000 won (US$86) on average during their stay," said Han In-soo, a tourism promotion team leader at Chungju City Government. "It costs only about 6 million won to host the contest, so it is a lucrative event for us."

One of the city's efforts is to link the martial arts contest with Suanbo, a special resort town in Chungju known for its hot springs. Before the city tried to transform itself into a martial arts city, Chungju had been best known for its spa resorts.

Han said the contest is just a beginning of Chungju's effort to bring more tourists from China. If the series of these contests turns out to be successful, the city plans to host the larger scale of the martial arts competition later this year and accommodate 3,000 to 4,000 people at a time.

"We expect these Chinese tourists to promote our city by word mouth and bring their neighbors next time," he said. "In the future, we will host art contests here to draw Chinese tourists who are interested in paintings and calligraphy."

The citizens here are welcoming their local government's effort. They said they're more than happy to see a large number of Chinese coming to their home turf.

"Nowadays, every South Korean city wants to draw Chinese tourists, right?" said Oh Jae-sun, a 49-year-old pastor who was a volunteer at the martial arts contest on last Thursday. "People here will not overlook the city's effort to boost the region's economy and tourism."

However, the problem for Chungju is the city's poor infrastructure compared to larger cities in South Korea. The city is hoping to have shopping malls and luxury hotels.

"We don't have multiplex shopping malls or duty-free shops like Seoul, so it is difficult for tourists spend more money here," said Jo Woang-ju, the tourism division chief at Chungju City Government. "The central government should think about lifting some regulations on duty free shops for the region's tourism development."

Chungju believes the event will be a seed for its overall development. The city officials said that they are also working with travel agencies and local business owners to make the martial arts contest sustainable.

In addition, Chungju plans to transfer the event hosting rights to the UNESCO's ICM later this year, so that the martial arts culture exchange program will have more legitimacy. The city believes the ICM, which will start operating in May, can make the contest a global event that can attract countries from other continents.

Lee Myeoung-seon, Korea-China Development Association Chairman who organized the event, believes that Chungju is on the right track. He has worked with Chungju City Government and Chinese officials for more than two years to launch the martial arts contest.

"Chungju has been building the image as 'a city of martial arts' for a long time," he said. "The city has an event which others can't imitate in a short time and since it's a unique tourism item, it will survive for a long time."

Lee, who also heads Tsinghua University's School of Continuing Education (SCE) Campus in South Korea, claims that the martial arts event will eventually open a new era for Chungju, but the city officials should be patient to see the fruits.

"The city shouldn't be about making money right away from this event," he said. "Once Chungju has a stable number of tourists from this event, then the city can start working on using it to allure investments and expand its tourism to medical or other areas."