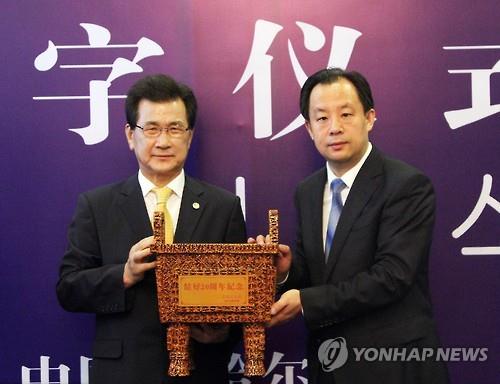 North Chungcheong Gov. Lee Si-jong and Heilongjiang Gov. Lu Hao signed a memorandum of understanding on the agreement during their meeting in Harbin, the capital of the northeast Chinese province.

A delegation, led by Lee, was visiting the Chinese city as part of activities marking the 20th anniversary of the two provinces forming a sister city relationship.

Lee also held talks with Wang Xiankui, the party secretary of Heilongjiang Province, earlier in the day and sought his help to put on a successful 2016 Cheongju World Martial Arts Masterships that the South Korean provincial government will host this year

The Sept. 3-8 competition in Cheongju, some 130 kilometers south of Seoul, is expected to bring together some 2,100 people from 60 countries and offer 13 martial arts programs, including taekwondo, judo and kickboxing.

During Wednesday's talks, Wang promised to send a Heilongjiang delegation to the competition.