(CHEONGJU=Yonhap News) An international martial arts competition in South Korea aims to earn the name of the "Martial Arts Olympics," as the organizers seek the participation of the world's top-class fighters.

The inaugural World Martial Arts Masterships (WoMAM) will be staged from Sept. 2-8 in the city of Cheongju, some 130 kilometers south of Seoul, in North Chungcheong Province. The event aims to bring together some 2,100 competitors from 60 countries and offer programs in 15 martial arts, including taekwondo, judo and kickboxing.

As of Monday, 1,987 athletes from 77 countries have signed up for the event, according to the organizers.

North Chungcheong Governor Lee Si-jong, who is also co-head of the organizing committee, said that its ultimate goal is to make WoMAM into the "Martial Arts Olympics." He added that organizers will work with the International Olympic Committee (IOC) to bring top martial arts practitioners in the future.

"In order to use word 'Olympic' you need to get approval from the IOC," Lee said to reporters last Saturday. "We have contacted the IOC to discuss this issue, and will try to invite top-class martial arts practitioners from the second edition of the event."

The organizers last week signed a cooperation agreement with the Korean Olympic Committee (KOC), the national Olympic body, for a successful event and claimed this will be the first step to getting recognized by the IOC. The organizers said they want to see athletes who compete at the Olympics and the Asian Games entering their event in the future.

"We will make the event bigger and more prestigious," Lee said. "We also want the event to be sustainable so that it can be staged for the next 100 years." 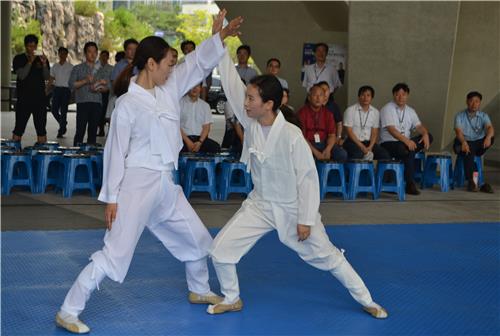 The organizers are planning to host the second edition of WoMAM in 2018, and are mulling over switching the event to odd years starting in 2021. They added that Chungju, another North Chungcheong Province city some 60 km north of Cheongju, will likely be the host of the second WoMAM. From the third edition, they plan to stage the event in metropolitan cities including the nation's capital Seoul.

Chungju, the birthplace of the World Martial Arts Union (WoMAU) which has 60 martial arts organizations under its umbrella from 40 countries, was originally considered for the host city this year. However, it turned down the offer due to budget problems.

The organizers said this year's WoMAM will not feature star athletes from the Rio de Janeiro Summer Games because it has not yet been sanctioned by the IOC. In order for Olympic athletes to compete in WoMAM, they must receive permission from IOC member organizations such as the World Taekwondo Federation and the International Judo Federation. Because of this reason, they said the inaugural WoMAM will not be an Olympic-style competition, adding that they will apply their own rules in taekwondo and judo, both official sports for the Summer Games.

"We can't apply Olympic-style rules in taekwondo and judo at this moment because we have not reached an agreement with the sports' governing bodies," said Heo Keon-sik, the head of the expert advisor commission within the WoMAM organizing committee. "We will try to adopt Olympic-style sparring in some martial arts events in the future which will attract more athletes from around the world."

Heo said organizers will establish the World Martial Arts Masterships Committee (WMC) in September to manage the competition systemically and build the legitimacy of the event by cooperating with international organizations. He added the WMC will also closely work with the International Centre of Martial Arts for Youth Development and Engagement (ICM), an institute under the United Nations Educational, Scientific and Cultural Organization (UNESCO), in running the competition. The ICM is based in Cheongju.

"This competition meets the requirement from UNESCO in terms of preserving traditional martial arts around the world," Heo said. "But we will make the event more competitive, so that it is not seen as festival. Some martial arts discipline may be dropped from the competition after the first edition." 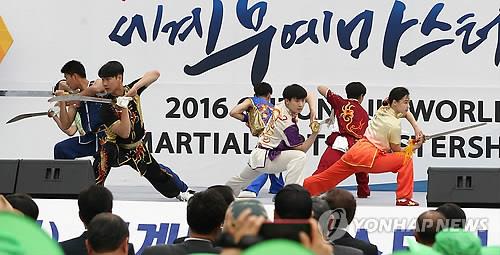 For the first edition, the organizers said they invited martial arts that have international federations with more than 16 member countries and their own international competitions.

The organizers said because of the small budget, they couldn't concentrate on promoting the event internationally. The budget for WoMAM is only 8.1 billion won (US$ 7.1 million) with just 900 million won provided by the Ministry of Culture, Sports and Tourism, according to organizers. This is only one-fourth of the budget used for the Asian Indoor & Martial Arts Games.

Although there are concerns about the quality of the event and operations, the organizers said they will learn from their mistakes and develop WoMAM into a top-class sports competition.

"For the inaugural event, we are first focused on smooth operations and the safety of athletes," said Ko Chan-sik, the secretary general of the organizing committee. "There are currently some 420 volunteers for this event, but we will expand the number and prepare everything thoroughly, from lodging to transportation."