(CHEONGJU=Yonhap News) "Jikji Korea," an annual festival on the world's oldest extant book printed with movable metal type, kicked off in the central South Korean city of Cheongju on Thursday to shed new light on its creative value, bringing together world-renowned writers and scholars.

The eight-day festival, which has been upgraded to an international event this year, is held under the theme of "Jikji, Enlightening the World," with the main venues including the Cheongju Arts Hall and the Cheongju Early Printing Museum. 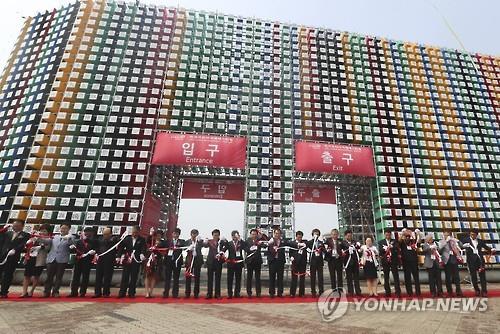 Organizers mark the opening of the 2016 Jikji Korea festival in front of the Jikji Wall set up in front of the Cheongju Arts Hall in the namesake city, some 130 kilometers south of Seoul, on Sept. 1, 2016. (Yonhap)

Printed at the city's Heungdeok Temple in 1377 during Korea's Goryeo Dynasty, Jikji is a Buddhist book on great Buddhist priests' Zen teachings. Its full name is "Buljo Jikji Simche Yojeol." UNESCO confirmed Jikji as the world's oldest metal-printed book in 2001, and included it in the UNESCO Memory of the World Programme that year.

Cheongju, home to the world's oldest movable metal type, has held the Jikji Festival since 2003 as part of efforts to develop the city into a "hub of printing culture" like Germany's Mainz and to further promote the metal-type text around the world.

At the opening ceremony, the Iber Archives, an institution that Latin American countries established in 1999 to cooperate in preserving documentary heritage, received the biennial UNESCO Jikji Memory of the World Prize with a prize money of US$30,000. The award is given to an individual or group who has made a contribution to preserving and promoting documentary heritage. The National Library of the Czech Republic received the inaugural honor in 2005, with four other institutions being awarded it so far.

The main exhibition with the theme of "Jikji, Golden Seed" features 57 Jikji-related works created by 35 teams of writers and artists from Britain, Canada and nine other countries. The works range from analogue to digital and media arts, giving visitors a glimpse into the creative and historic value of Jikji.

In particular, world-renowned industrial designer Ron Arad has set up Jikji Pavilion at the square of the Cheongju Arts Hall. Shaped like the Jikji book placed face down, the structure capable of accommodating some 30 people is used as a space for various cultural lectures.

Another symbolic structure, "Jikji Wall" of 8,000 lattice boxes features a total of 16,021 Chinese characters contained in the second volume of the ancient book in front of the Cheongju Arts Hall. The wall is 11.7 meters high and 87 meters long.

Printing-related relics, including the printing press used by Johannes Gutenberg, is also displayed during the festival, whose programs also include experiencing ancient printing methods and performances of traditional plays and music.