(CHEONGJU=Yonhap News) The government of North Chungcheong Province, central South Korea, said Sunday it will bid for the hosting of the 2018 World Firefighters Games (WFG), a major international sporting event for firefighters.

The games also known as the "mini-Olympics for firefighters," in which full-time, volunteers, industrial and military fire service personnel from 50 countries worldwide are expected to take part, involving 60 individual and team sporting events, and including events that are specific to the firefighters' emergency service role.

The biennial WFG has been held 12 times, with the first one being held in New Zealand in 1990. In 2010, the South Korean city of Daegu hosted the event.

A delegation from the province plans to visit the governing body of the world firefighters' games in Perth, Australia, next month to express its intention to bid for the upcoming event and gather related information. 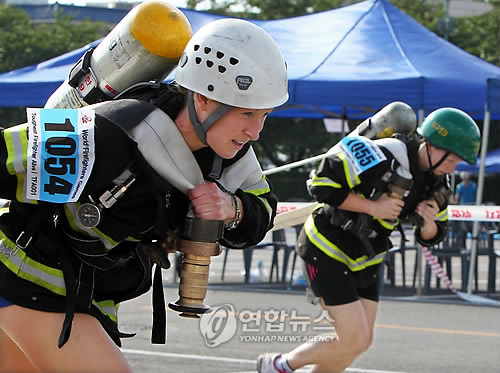 In this undated photo, released by the government of North Chungcheong Province on Feb. 26, 2017, firefighters take part in the World Firefighters Games (WFG), a major international sporting event for firefighters. (Yonhap)

The North Chungcheong provincial government is scheduled to establish a committee in April to implement the action plan for the bidding and submit it to the governing body the same month.

The governing body is expected to select the venue before September this year after completing on-site inspections of candidate cities, with three to four countries likely to join the bidding.

The South Korean province's share of the bill to host the event will come to an estimated 4.1 billion won (US$3.6 million) and the overall economic impact of hosting it is expected to reach 10 billion won, the local government said.

The 2018 event, to be staged for eight days in September or October next year, will likely bring together 6,000 people from 50 countries worldwide.