(SEOUL=Yonhap News) The government of North Chungcheong Province, central South Korea, and the city of Jecheon in the province will jointly host an international exposition focused on the Korean medicine and bio industry in September in a bid to develop the Korean herbal medicine-based bio industry into a future growth engine, organizers said Thursday.

As part of efforts to promote the International Korean Medicine Bio Industry Expo, the organizing committee for the Sept. 22-Oct. 10 event held an event at Gwanghwamun Plaza in downtown Seoul the previous day to mark the 100-day countdown to the exposition to be held in Jecheon and vow to make it a success.

Attending the event were North Chungcheong Gov. Lee Si-jong; Semyung University President Lee Yong-gul, who serves as co-chiefs of the organizing committee; and Jecheon Mayor Lee Keun-kyu, who heads the executive committee for the event, as well as 1,000 other people. 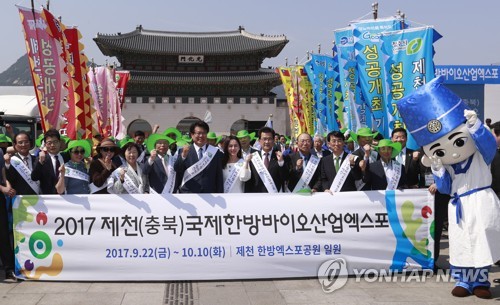 North Chungcheong Gov. Lee Si-jong (4th from R), actress Park Joo-mi (5th from R) and other participants pose for a photo during an event at Gwanghwamun Plaza in Seoul on June 14, 2017, to promote the International Korean Medicine Bio Industry Expo that will be held in Jecheon, a city in South Korea's central province of North Chungcheong from Sept. 22-Oct. 10. (Yonhap)

The governor told the crowd that the exposition is "a meaningful opportunity to show the world the future of a new industry through a fusion of Korean herbal medicine and the bio industry."

"By hosting the exposition, Jecheon will become a mecca to discover the Korean medicine-bio industry," Lee said.

Jecheon Mayor Lee wished that the exposition will help "make the city both become one of the world's centers in the Korea medicine-bio industry and evaluated as a mecca of the natural product industry in the Northeast Asian region."

The organizing committee designated Lee Sim, head of the Korean Senior Citizens Association, and Kim Byeong-won, chief of the National Agricultural Cooperative Federation, as honorary ambassadors to promote the exposition.

Spearheaded by the exposition's official mascots of Bakdali and Geumbongi, the participants marched through the plaza and Cheonggye Plaza following the event to make their pitch for it.

The organizing committee is offering tickets for the exposition via its website (http://www.korean-medicine-expo.kr). The ticket purchases in advance, scheduled to run through Sept. 15, give ticket buyers a 20 percent discount off the list price.