"Jeju Air is the first Korean passenger carrier, which has received such an approval since January when China stopped allowing Korean chartered planes to fly between the two countries," a company spokeswoman said.

Two chartered flights are scheduled to deliver a combined 360 passengers to the famous tourism site of Zhangjiajie in the southeastern part of China from Cheongju, she said. The flights will take place on July 25 and 29.

But the company and the transport ministry remained cautious, saying the "one-time" approval does not necessarily mean Beijing will lift the ban on package travel to South Korea.

China has explicitly opposed the deployment of the Terminal High Altitude Area Defense (THAAD) system, arguing the powerful X-band radar that comes with it could spy on its military.

In July of last year, Seoul and Washington announced a decision to install the U.S. anti-missile system in South Korea to better defend against North Korea's nuclear and missile threats.

In an apparent retaliation against the move, China has banned the sale of travel packages to South Korea since March 15.

They transported 56.8 percent of the passengers on domestic routes and 19.6 percent of passengers traveling abroad in 2016. The figures mark a gain from 54.6 percent and 14.6 percent, respectively, from a year earlier, the transport ministry said. 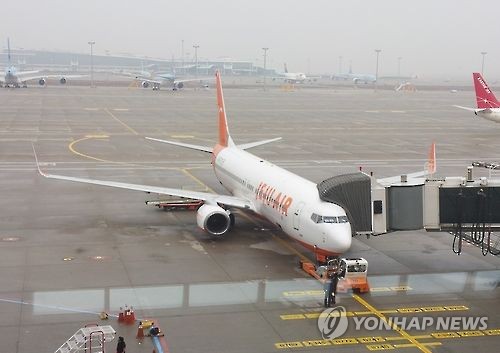