(CHEONGJU=Yonhap News) A monthlong international craft biennale is underway in the South Korean city of Cheongju, featuring some 4,000 works of 780 teams from 16 nations.

South Korean composer Younghi Pagh-Paan's tribute song "My Mind" was played at the opening ceremony of the 2017 Cheongju Craft Biennale, which kicked off Wednesday and will run until Oct. 22. She wrote the song by drawing inspiration from a work of 16th-century Korean poet Jeong Cheol.

Dancers Koo Seo-young and Ryu Myeong-ok showed contemporary dance at the Swiss and Mongolian Halls, while classical concerts were held at the Korean and Japanese Halls.

In a special exhibition, Chinese artist Wu Jianan displayed his work "Cheongju, 500 Brush Strokes" made of paper on which visitors drew lines with brushes. 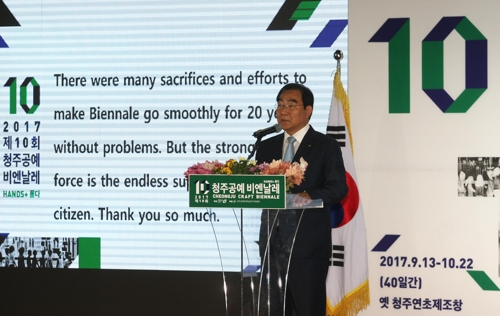 Cheongju Mayor Lee Sung-hoon delivers an opening speech at the 2017 Cheongju Craft Biennale in the namesake city on Sept. 13, 2017. (Yonhap)

"We've tried to make this year's biennale easier and more interesting to visitors. It'll be a place in which the world becomes one with craft," Cheongju Mayor Lee Sung-hoon said in an opening speech.

The opening ceremony was also attended by governors, culture minister and Danish and Swiss ambassadors.

The biennale, the 10th of its kind, presents exhibitions, symposiums and workshops under the theme of "Hands Plus Embrace."