(CHEONGJU=Yonhap News) More than 100,000 people toured the 2017 Cheongju Craft Biennale during the Chuseok (harvest moon) holiday last week, a welcome sign that the event will be able to meet its attendance target, organizers said Thursday.

According to the organizing committee, over 100,000 visitors were counted from Sept. 30, when the holiday began, to Sunday. The total number of visitors so far since the event's opening on Sept. 13 comes to more than 200,000. The committee expects to easily meet the goal of 350,000 visitors by the biennale's closing on Oct. 22.

A number of special performances and workshops were arranged for the holiday to attract visitors. People were able to make handicrafts, engage in discussions about craftworks, design robots and try drawing machines and three-dimensional scanners.

At the resting space on the second floor of the exhibit, music performances were staged, including cello and Mongolia's traditional stringed instrument "morin khuur."

"Many people from other regions came during the long 10-day holiday," an official at the organizing committee said. "We expect group visitors of students to come once the midterm test period ends."

Some 780 teams from 18 countries are participating in the biennale under way in Cheongju, 137 kilometers south of Seoul. 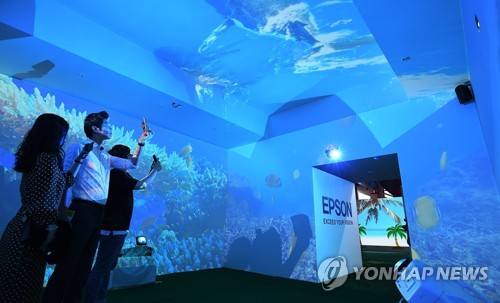