(CHEONGJU=Yonhap News) An international craft festival ended a 40-day run here over the weekend with a record-high number of visitors, organizers said Tuesday.

More than 350,000 people visited the 2017 Cheongju International Craft Biennale that closed Sunday and featured more than 4,000 craftworks by hundreds of Korean and foreign artists.

The figure for the 10th festival compares favorably with about 310,000 visitors tallied two years ago.

The organizers attributed the rise to the 10-day Chuseok holiday, the longest in decades, earlier this month during which over 100,000 people visited.

The biennale was also open to visitors at night during weekends.

About 17,000 foreigners visited the biennale, accounting for about five percent of the total.

The biennale began at an old tobacco processing factory in Cheongju, North Chungcheong Province, on Sept. 13 under the theme of "Hands+ Embrace."

The theme was chosen to "evoke human imagination and to find coexisting denominators to communicate with the general public" as crafts meet new genres and technologies, although it began as a utility object, the organizers said, noting, "Moreover, it expands its role as a means to heal human temperaments."

Cheongju Mayor Lee Sung-hun said at the closing ceremony that the biennale, which began in 1999, has grown into a highly acclaimed craft, design and cultural art festival.

The biennale showcased works made by 780 artists from 18 countries.

It also hosted a series of symposiums and workshops with titles like "The Biennale of Yesterday," "The Future of Craft in the time of the Integration of Art, Science, Technology and Information," "Crafts, So into You," "The Creators' Craft from Everyday Culture" and "My Craft Participants."

In addition, the biennale highlighted the "Cheongju Digital Craft Lab," an educational program that let people know how to blend together science, technology, design and crafts, allowing participants to experiment with their individual imagination using such gadgets as LED lights, microcontrollers, sensors, 3D scanning and 3D printing under the theme of "Do It With Others (DIWO)" rather than "Do It Yourself (DIY)."

The craft workshop which combined crafts and food, science, cinema and the Korean alphabet Hangeul was especially popular, with tickets selling out quickly.

Organizers also said that the Global Pavilion on the third floor which showed 603 craftworks made by more than 300 artists from nine countries attracted many visitors who enjoyed the global art crafts trends and got a glimpse of the future of art crafts and the history of the art crafts of each country.

The arts fair and crafts fair served as a venue for artists and visitors to communicate with each other while providing the chances for visitors to purchase items.

As many as 610 million won (US$539,345) worth of craft and artistic items were sold during the biennale.

Event coordinators said they will further build up the biennale as a major international craft network in the coming years by making up for any faults discovered so far.

The 2019 Cheongju International Craft Biennale will be held July 2019. 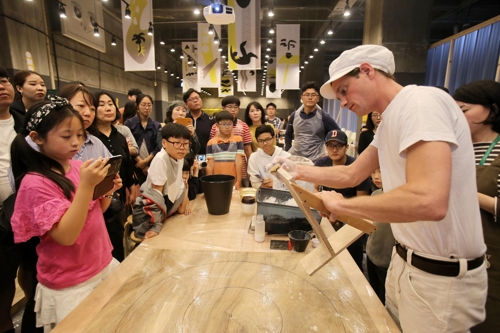