The remarks came at the opening ceremony of the National Sports Festival in Chungju, located some 150 kilometers southeast of Seoul.

"To us, the history of sports is a history of challenge and courage, as well as unity and alliance," the president said, according to a script of his speech released by the presidential office Cheong Wa Dae in Seoul.

"During Japan's occupation of Korea, the people saw the light of hope in the darkness of colonization through our athletes who competed with all they have," the president added, referring to Japan's 1910-45 colonial rule of Korea.

Moon promised more support for athletes and the sports industry.

"The government will find and nurture athletes with great talents by expanding the foundation for sports and create an environment for a virtuous cycle where the athletes will become sports instructors after they retire," he said. "Also, it will provide scientific and systematic support for athletes so they may show their best abilities."

The president also called for increased support for the Winter Olympic Games and Paralympic Games to be held in PyeongChang early next year.

"Once the Republic of Korea hosts the PyeongChang Winter Olympic Games in February, the country will become a nation that has hosted the world's four major sports event. I am confident the cheers that will spread to the rest of the country from the center of this nation here in North Chungcheong Province over the next week, and the sweat of the athletes here will become the basis for our success in the PyeongChang Winter Olympics and Paralympics," he said. 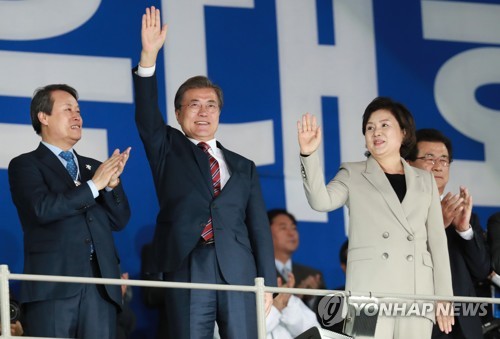