(CHEONGU=Yonhap News) The central government has recognized a 2019 international martial arts competition to be hosted by the provincial city of Cheongju as an official event, paving the way for it to receive state financial support, a city official here said Thursday.

The inaugural World Martial Arts Masterships was held over a week in September last year in the city, 130 kilometers south of Seoul. Co-hosted by the city and North Chungcheong Province, the competition was attended by 1,900 athletes and officials from 81 countries and involved 17 events, including taekwondo, judo, kickboxing and kendo.

"We plan to expand the 2019 Masterships, with 4,000 athletes and officials from about 100 countries competing in 20 events," the official said.

The city wants to organize the event jointly with the Korea Olympic Council and UNESCO, the official added. 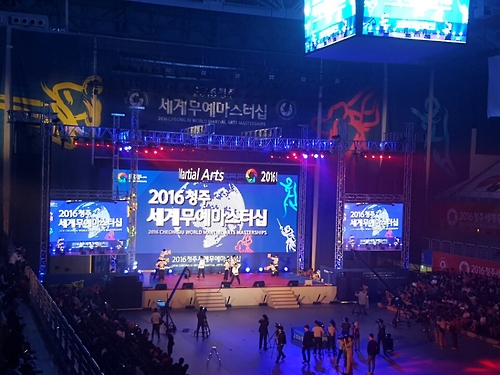 The closing ceremony of the World Martial Arts Masterships takes place at Cheongju University in Cheongju in this file photo dated Sept. 8, 2016. (Yonhap)