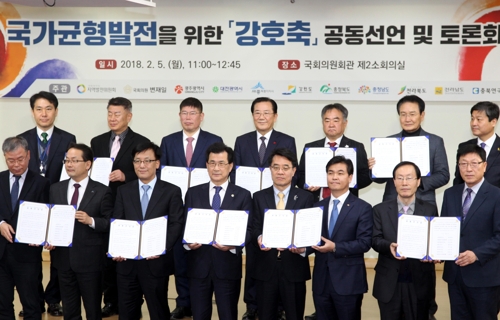 (CHEONGJU=Yonhap News) Chungbuk-do will work with Gangwon, Chungcheong and Honam to research a plan for the establishment of a new development axis.

The purpose of the project is to turn the mostly isolated areas of Gangwon, Chungcheong and Honam in to a new growth engine for the country.

Chungbuk-do has assigned the research required for a comprehensive development plan to Chungbuk Research Institute and is expecting a briefing later this month.

The 7 cities and provinces involved in the development axis (Gangwon, Chungnam, Daejeon, Saejong, Jeonbuk, Jeonam and Gwangju) will set up its own 5-year balanced development plan as part of the national plan and carry out research for the new development axis.

Chungbuk Reseach Institute plans to incorporate the research for each of the 7 regions and create a comprehensive development plan by the end of this year.

Chungbuk-do will work to have the final, comprehensive plan included in national mid to long term plans such as the national 5-year balanced development plan and the 5th National Comprehensive Territory Plan. It will also be used to secure additional budgets for related businesses.

The 7 cities and provinces included in the axis held a joint debate in the National Assembly last February, and adopted a joint proposal to reflect the balanced development policy.