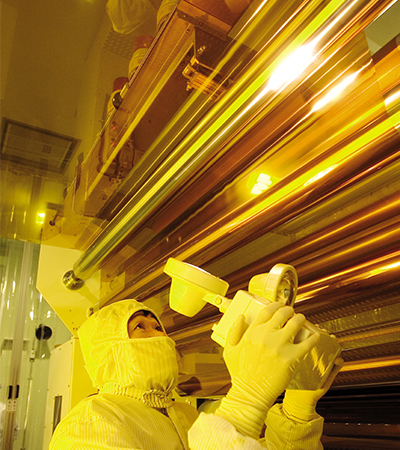 SKC Co., a mid-sized chemical company of South Korea’s SK Group, has embarked on the process to build a manufacturing and processing facility for transparent polyimide (PI) films, a key material for flexible displays.

The company said it held a groundbreaking ceremony on Tuesday for the transparent PI film production line with its film processing subsidiary SKC Hi-tech & Marketing. The new PI film line will be added to SKC’s Jincheon plant in North Chungcheong Province.

This is a follow-up process after SKC in December 2017 agreed with SKC Hi-tech & Marketing to invest 85 billion won ($7.7 million) to launch the PI film manufacturing and processing business. SKC will start install new machines and equipment in the factory in the first half of next year with an aim to begin commercial production of the films in October 2019.

Colorless PI film is a core material for flexible screens because it is bendable despite having a hard surface like glass. “SKC would be the only company to have a one-stop production and processing facility for transparent PI films,” said an official from the company, adding that the company would be able to provide quick and high-quality service because one-stop production is available at the facility from producing film materials to coating.

According to market research companies, the market for colorless PI films would grow to 1.2 trillion won by 2023. SKC formed a task force team in charge of PI film production and plans to recruit more PI film researchers and experts to get ahead in the market.

By Hwang Soon-min and Choi Mira