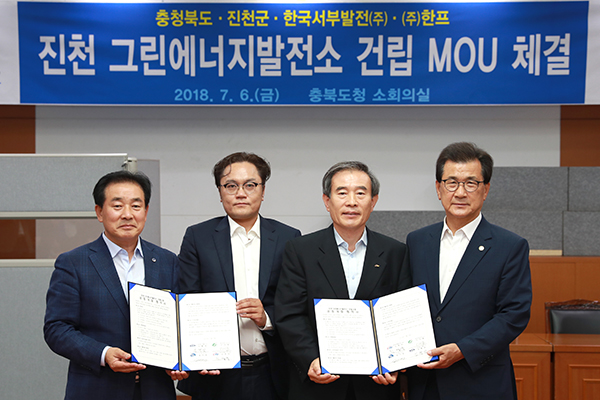 Hanp, Korea Western Power, and KB Securities will set up a special purpose company and invest a combined 525 billion won for the project. The consortium will embark on the construction in September, this year, with an aim to complete and begin operations in September, next year.

Once the fuel cell power plant begins operations, it will be able to produce 656-gigawatt hour electricity that can be supplied to about 240,000 households - which is 23 percent of total power usage in Jincheon-gun and 2.9 percent in North Chungcheong Province. The fuel cell power plant is expected to raise a total 3.4 trillion won from electricity sales during 20 years of operation.

The power plant will be operated based on a fuel cell system that produces electricity by extracting hydrogen from liquefied natural gas and reacting it to oxygen in the air. The environmentally-friendly power plant, in particular, is preferred to other generators as it emits a very small amount of air pollution substances such as nitrogen oxide, sulfur oxide, and fine dust, and produces almost no noise, odor, or smoke pollution.

By Hwang Soon-min and Lee Eun-joo