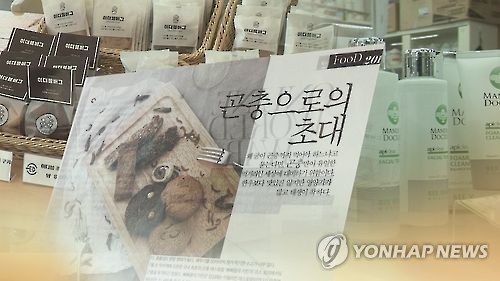 (CHEONGJU=Yonhap News) The number of insect farms in Chungbuk-do is showing a great increase from only 75 in 2015 to 124 in 2016, and 182 this year, attracting big interest to the insect industry.

The annual income of these farms also increased by more than 5 times, from KRW 290 million in 2015 to KRW 2.36 billion last year.

The market size of the insect industry in Korea is expected to grow upto KRW 500 billion by 2020, and the industry is considered as a blue ocean business.

The establishment of a high-tech facility that supplies edible insect seeds will start in order to support the insect industry.

The Province plans to build an insect seed production center with one floor above ground and one below ground (total ground area 1,900 ㎡) by the end of next year by investing about KRW 5 billion (KRW 2.5 billion of national expenditure and KRW 2.5 billion of local government expenditure) in Agricultural Research and Extension Service of the Province.

Recruitment of the experts in insect business will also start accordingly.

The center will produce a big amount of insect seeds including meelworm beetle, Protaetia brevitarsis, dynastid beetle, Gryllus bimaculatus, and firefly which have the most demands.

Moreover, it will play the role of an advanced base in the edible insect industry in Korea as it plans to develop excellent insect resources and establish disease management system for insects.

"The center is one of the projects from the Ministry of Agriculture, Food and Rural Affairs, and we will provide stable supply of the insect resources and establish a systematic disease management system through the center," said an official from the Agricultural Research and Extension Service.