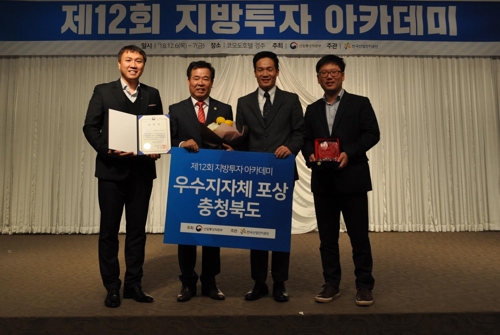 (CHEONGJU=Yonhap News) On 6th, Chungbuk-do received a Ministerial Award for being selected as the 'Excellent Local Government in Investment Promotion' at the 12th Regional Investment Academy, hosted by the Ministry of Trade, Industry and Energy(MOTIE).

The Ministry selects the Excellent Local Government in Investment Promotion based on local metropolitan governments' efforts to attract investment, corporate management, and satisfaction by the investment company. Municipalities in the Greater Seoul Metropolitan Area are outside the selection pool.

Chungbuk-do will receive a 5% more government subsidies for local investment promotion next year.

The province drew investment of KRW 43.657 trillion since the government from the 6th election had run. As of October, it was ranked first in the total area designated for industrial complexes and in the rate of increase for pre-sale of such areas.

"It proves that Chungbuk is a good place to invest," said, a provincial official. "We will make the "Soaring Economy Chungbuk" a realization through aggressive investment promotion activities," a statement from the same official.