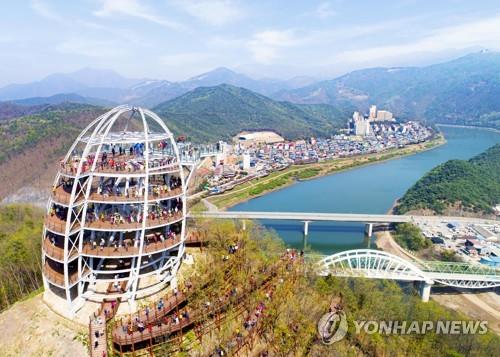 (CHEONGJU=Yonhap News) On December 31, 2018, Chungbuk-do announced that the Mancheonha Skywalk in Danyang, Mt. Goesan Sanmagi-yetgil and Cheongnamdae in Cheongju were included in the "Korea's 100 Sightseeing Spots in 2019~2020."

First time to be named as one of the Korea's 100 Sightseeing Spots, Mancheonha Skywalk is a new landmark of Danyang opened last July, which has had more than one million visits since its opening.

The Eight Beauties of Danyang and Mt. Goesan Sanmagi-yetgil were on the list for four and three times, respectively.

The Eight Beauties of Danyang include Dodamsambong, Gudambong, Oksunbong, and five other scenery of Danyang.

One can enjoy the spectacular scenery of Daecheong-ho in Cheongnamdae, which has been a vacation spot for a former president.

The Korea Tourism Organization hosts and the Ministry of Culture, Sports and Tourism organizes the "Korea's 100 Sightseeing Spots," which the selections are made every two years through the recommendation of local governments, written evaluation and on-site evaluation.