The mayor of Chungbuk province "Foster Goesan as the mecca of the organic industry"
Date
2019.04.12
Views
113 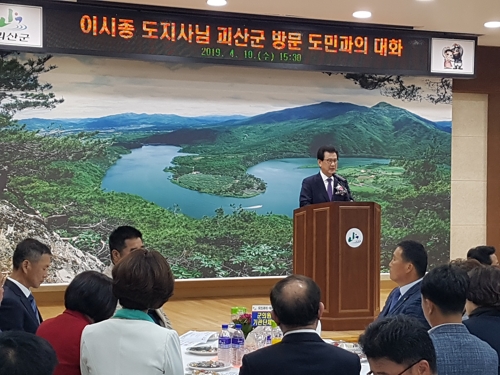 (GOESAN=Yonhap News) The mayor of Chungbuk province announced that "We will develop Goesan as the mecca of the organic industry" on April 10.

In his conversation with 200 residents during his visit to Goesan, he assessed that "Geosan has become a leader in the organic industry since it successfully hosted the world's organic industry EXPO and organic festival."

He went on to say that "We will promise you our commitment to support Goesan's initiatives to foster the organic industry such as the establishment of research center on organic farming, creation of organic healing center, and organic-related international conferences."

He also briefed the successful outcomes of the provincial government's affairs, saying that "Six Chungbuk-related projects worth KRW 12.9 trillion have been confirmed as to be exempted from preliminary feasibility study, while attracting KRW 35 trillion investment from SK Hynix."

He said "We will transform Chungbuk from a small and weak province on the periphery of the continent into a big and powerful province".