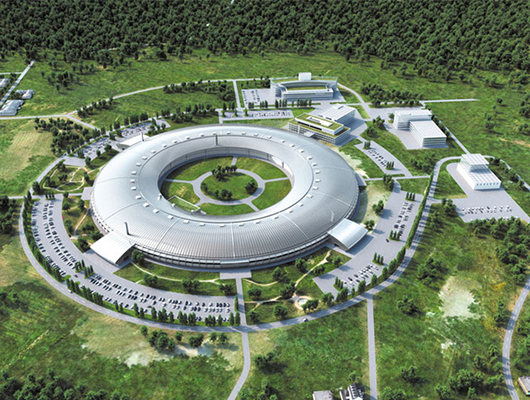 South Korea’s plan to build a fourth-generation synchrotron radiation accelerator is likely to pass feasibility studies this week, paving the way for the 1 trillion-won (US$817 million) project to kick off next year.

An influential scientific source said on Wednesday final decision making is one step closer toward approval and it will be announced this week.

Upon the completion of feasibility studies, the synchrotron radiation accelerator to be built in Ochang, Chungbuk Province, will be up and running in 2028 after six years of design and construction.

The accelerator can push electrons to move at extremely high speeds to create powerful X-ray beamlines that can be used to analyze superfine materials. It is often called a factory of light because it can produce light of various wavelengths such as infrared, visible, and X-rays. The gigantic facility can be used in the development of advanced materials, semiconductors, batteries, displays, as well as drug discovery.

The fourth-generation synchrotron radiation accelerator was designed to be in the world`s best performance with a beam energy of 4GeV, up from the previous 3GeV level, and this light brightness is about 100 times higher than that of the 3rd generation, or 100 billion times that of sunlight.

Korea Basic Science Institute said the new radiation accelerator is expected to have the effect of creating 6.7 trillion won in economic value and 137,000 jobs.

By Lee Sae-bom and Minu Kim