(PYEONGCHANG=Yonhap News) The top organizer of the first Winter Olympics in South Korea promised a successful event at a gathering of international media representatives on Tuesday.

At the start of the World Press Briefing (WPB) in PyeongChang, some 180 kilometers east of Seoul, Lee Hee-beom, head of the organizing committee for the 2018 PyeongChang Winter Games, said the competition "will leave a successful footprint" in the Olympic annals.

"We've moved past the planning stage and are entering the operational phase," Lee told the audience of international journalists and press-related officials from the International Olympic Committee (IOC). "We successfully staged Olympic test events in alpine skiing, freestyle skiing and snowboard. And from late this year through next April, we will host 26 more test events, and we'll make sure they'll all be successful, too." 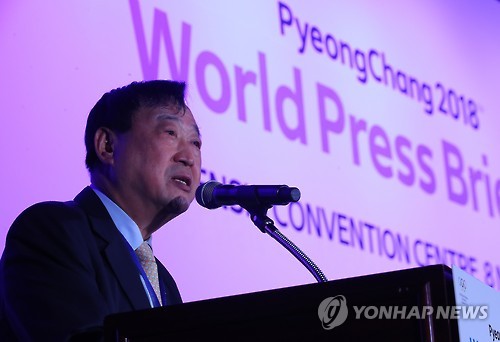 PyeongChang 2018 is the first Winter Games in South Korea, and first Olympics in the country since Seoul hosted the 1988 Summer Games.

Hosted by Olympic host cities, the WPB brings together journalists and IOC officials for meetings on press operations during the Games, covering the issues of press accreditation, transportation and accommodations.

PyeongChang's WPB runs through Friday, with the participants also taking tours of the Olympic venues and other facilities.

Lee stressed PyeongChang's commitment to foster peace and sustainability and to promote Korean culture, both traditional and contemporary.

Lee said he hopes PyeongChang 2018 will allow Asian winter sports to develop further and narrow their gap with those in Europe and North America, adding, "PyeongChang and Gangwon Province will re-emerge as the Mecca of winter sports."