(CHUNCHEON=Yonhap News) The South Korean province of Gangwon will form a pact this week with the Japanese prefecture of Nagano, the venue of the 1998 Winter Olympics, on friendship and exchanges as it is preparing for the 2018 Winter Games, officials at the Gangwon provincial government said Wednesday.

A 41-member delegation from the local government, led by Vice Gangwon Gov. Bae Jin-hwan, will make a four-day visit to Nagano Prefecture, central Japan, on Thursday to sign the envisioned pact that includes the Japanese prefectural government's support for the 2018 Winter Olympics to be held in PyeongChang, an alpine town lying some 180 kilometers east of Seoul in Gangwon Province.

The delegation's trip to Nagano comes after Nagano Gov. Shuichi Abe and members of the Nagano prefectural assembly visited South Korea's northeast province of Gangwon in August last year and made a proposal for the pact. 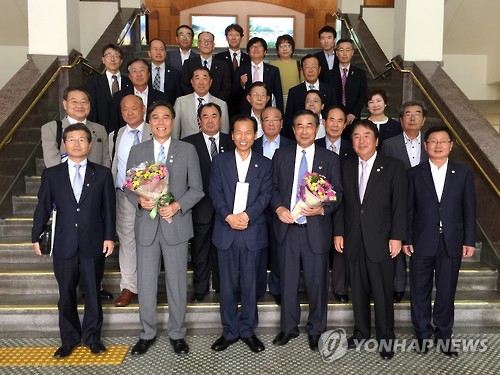 Gangwon and Nagano are scheduled to sign the agreement Friday that contains a clause for Nagano to give its know-how on the management of the 2018 event. The agreement also calls for the two parties to promote cooperation and exchanges in tourism, sports, culture and arts, and youths.

On Saturday, the South Korean provincial government will hold an event at a hotel in the city of Nagano aimed at promoting the Winter Olympics and tourism to Gangwon, with an arts troupe from Gangwon to perform traditional Korean dance and music.