(SEOUL=Yonhap News) With just 396 days left before the kickoff of the 2018 Winter Olympics on Monday, South Korea is moving to kick-start related festivities that will generate interest in the quadrennial event.

Organizers said that while the one-year countdown, or G-1 year, falls on Feb. 9, there is a need to hurry to prepare the country for the first Olympic Games it will host in 30 years.

The government and the host city PyeongChang are planning a massive campaign to celebrate the one-year countdown, according to the Ministry of Culture, Sports and Tourism.

Some 60 promotional and cultural events marking the games are scheduled to be held throughout downtown Seoul and in parts of Gangwon Province, including PyeongChang, Gangneung and Jeongseon, around Feb. 9. 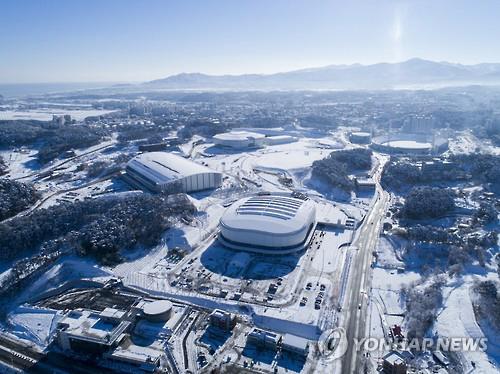 Shown here is an aerial view of Gangneung Olympic Park, the main venue of the 2018 PyeongChang Winter Olympics, blanketed by snow on Dec. 28. (Yonhap)

The PyeongChang Organizing Committee is preparing for a large one-year countdown event on the official G-1 date at the Gangneung Hockey Center. The official Olympic torch and uniform will also be revealed then.

On Feb. 8, an unveiling ceremony for a countdown clock for the games will be held at the Seoul City Hall plaza. A classical concert marking the beginning of the countdown is scheduled at the Seoul Arts Center in southern Seoul.

The government said it is also ratcheting up the promotion of the two official mascots: Soohorang, a white tiger, and Bandabi, an Asiatic black bear. 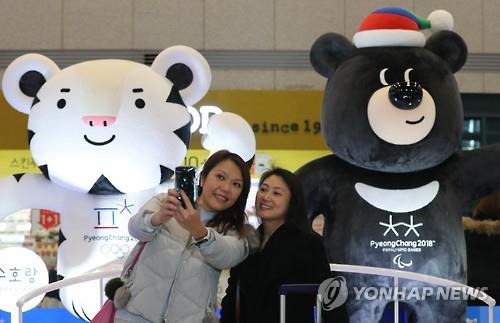 Two women photograph themselves with the mascots for the 2018 Winter Olympics -- the white tiger Soohorang (L) and the Asiatic black bear Bandabi -- in the background at the arrival area of Incheon airport, west of Seoul, on Jan. 4, 2017. The 2018 Olympic Winter Games will kick off on Feb. 9, 2018, in the eastern South Korean resort town of PyeongChang. (Yonhap)

Organizers are also in the final process of picking out some 22,400 volunteers to help out with translation, operational and media support.

"We see the upcoming G-1 mark as an indispensable moment to spread the Olympics mood," a culture ministry official said.