(SEOUL=Yonhap News) The torch relay for the first Winter Olympics in South Korea will begin on the day when the countdown reaches 100 days, the event's organizers said Monday.

The organizing committee for the 2018 PyeongChang Winter Games said the Olympic flame, as per the 80-year tradition, will be lit in Olympia, Greece, the site of the ancient Olympic Games, on Oct. 24. The flame will travel around Greece for a week and will be handed over to a PyeongChang delegation on Oct. 31 in Athens.

The torch will then arrive in South Korea on Nov. 1 to begin a tour through 17 cities nationwide plus 18 cities and counties in Gangwon Province, where PyeongChang is located.

The torch relay will cover 2,018 kilometers in distance, signifying the year in which the Feb. 9-25 Olympics will take place.

The relay will go on under the slogan, "Let Everyone Shine," a nod to the Olympic flame itself and to PyeongChang's hopes of bringing the world together for the world's biggest winter sports competition.

The organizing committee said it will select 7,500 runners from all walks of life and will pick an additional 2,018 support runners. 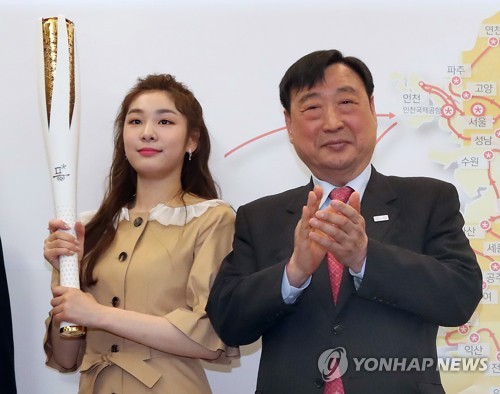 Kim Yu-na (L), an honorary ambassador for the 2018 PyeongChang Winter Olympics, and Lee Hee-beom, head of PyeongChang's organizing committee, pose for pictures during the press conference in Seoul announcing plans for the Olympic torch relay on April 17, 2017. (Yonhap)

Lee Hee-beom, head of the orgaizing committee, said the makeup of the runners will represent "unity and harmony."

"The fundamental concept of the Olympic Games will be to bring our people together," Lee said. "Regardless of gender, age, occupation or social status, we'll select people who embody this concept."

Kim Yu-na, the 2010 Olympic figure skating champion and an honorary ambassador for PyeongChang 2018, called the torch relay "a national festival" open to all.

"Anyone with a dream and passion can participate in this once-in-a-lifetime opportunity," said Kim, who ran in the relays before the 2006 and the 2010 Winter Games. "The key to a successful Olympics will be the support of the people, and I hope the torch relay will help kick off a successful Olympics in PyeongChang."

The main runners will receive complimentary relay uniforms and receive a certificate of participation signed by the chief Olympic organizer and the head of the International Olympic Committee.

Three presenting partners for the torch relay -- Coca-Cola, Samsung Electronics and KT -- will accept online applications through May.