(PYEONGCHANG=Yonhap News) South Korea is gearing up its efforts to attract more local and foreign visitors to the 2018 PyeongChang Winter Olympics, officials said Friday, with the quadrennial event just five months away.

The Winter Games will be held in the alpine county of PyeongChang, 180 kilometers east of Seoul, from Feb. 9-25, 2018, and will be attended by about 6,500 athletes and officials from 95 countries.

The government of Gangwon Province, where PyeongChang and other venues for the upcoming competition are located, plans to make the best of its outstanding natural beauty, historic landmarks, traditional markets, famous restaurants and diverse festivals.

From encouraging local restaurants to create English menus to improving transportation to the event venues, efforts are under way to make PyeongChang an attractive tourist destination not only for the Olympics but also for after the competition, officials at the organizing committee said.

According to officials from the organizing committee, 95 percent of construction for the 35,000-seat PyeongChang Olympics Stadium has been completed as of last week. When they are finished putting the last touches to the facilities for visitors, companies sponsoring the Olympics will begin building pavilions nearby, with construction to be finished by the end of this year. 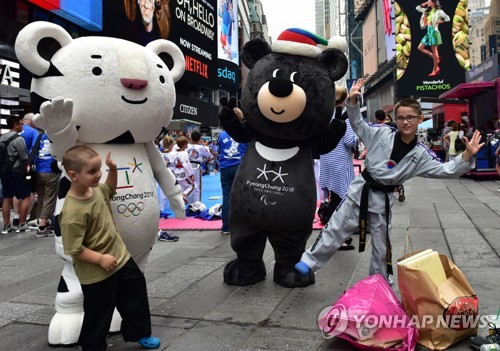 Soohorang (L) and Bandabi, mascots of the 2018 PyeongChang Winter Olympics, pose with American children during an event to promote the games at Times Square in Manhattan, New York, on June 23, 2017. The event was organized by the Korea Tourism Organization, which also provided the photo. (Yonhap)