(GANGNEUNG=Yonhap News) A Korean garden named after the South Korean city of Gangneung opened in Russia's Siberian city of Irkutsk on Thursday as part of efforts to promote friendship between the two sister cities, officials said.

Set up on a 2,000-square meter area, the garden has a Korean-style pavilion and other traditional Korean structures, in addition to a botanical section housing Korean plants. The Gangneung city government and Irkutsk State University jointly funded the project.

Gangneung and Irkutsk forged their sisterhood in 2011 and have since promoted exchanges in various areas, such as science and technology, academics, arts and administration.

During the ceremony, Choi called for Irkutsk's help in Gangneung's efforts to successfully host the upcoming PyeongChang Winter Olympics. The mayor also said he hopes the Gangneung Garden will serve as a location where the citizens of Irkutsk can experience Korean culture so as to further enhance the friendship between the two cities. 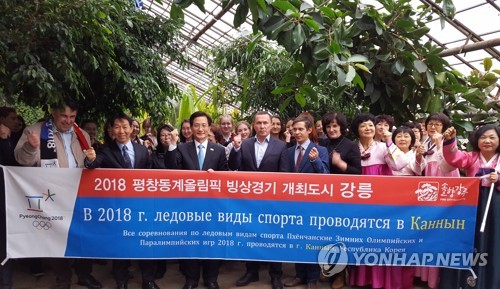 Gangneung Mayor Choi Myeng-hee (third from L) and others pose for a photo during the opening ceremony of the "Gangneung Garden" in Russia's Siberian city of Irkutsk on Nov. 9, 2017.