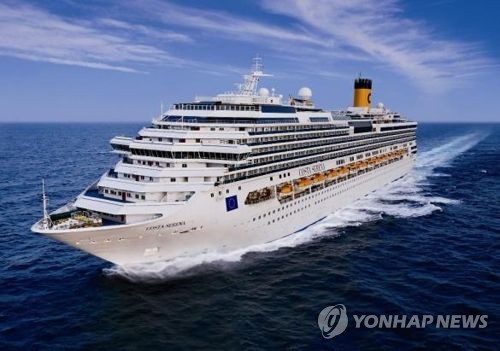 (SOKCHO=Yonhap News) The Port of Sokcho was bustling ahead of welcoming its biggest vessel to date, the 110,000 ton cruise ship.

The Costa Serena will pick up an additional 640 passengers from Sokcho and leave for Vladivostok, Russia at 3:30 p.m.

The Costa Serena is owned by Italy's Costa Cruise and is classified as a large-size vessel at 290m long and 35.5m wide.

This is the first time a ship of this size is entering Sokcho Port.

The largest vessel to enter Sokcho Port before Costa Serena was the 75,000 ton Costa Victoria cruise ship that docked last May.

Ahead of Costa Serena's arrival, Sokcho Port was bustling with activity with the Korea Hydrographic and Oceanographic Agency surveying the waterways and the International Cruise Terminal CIQ preparing measures for smooth operations.

The Korea Hydrographic and Oceanographic Agency conducted an in-depth investigation of the water depth and the bottom of the seabed in preparation for the arrival of the large vessel from April 30th to May 1.

The agency found no problems in their survey.

The Gangwon-do Korean East Sea Headquarters carried out dredging work on the port ahead of the Costa Serena's arrival last September and October.

The CIQ agencies of the Sokcho International Cruise Terminal also prepared measures for handling around 4,000 entries and exits, including crew members.

The passengers that board the Costa Serena at Busan are boarding a domestic route, as the ship stops at Sokcho, and will have to undergo immigration proceures at Sokcho Port before the ship leaves for Russia.

As such, the CIQ agencies are holding meetings to find the most efficient and safest ways to deal with the influx of passengers that will pass through immigrations.

The city of Sokcho will also provide shuttle busses for passengers coming to Sokcho Port via the Costa Serena and want to tour the city.

The city plans to have 5 busses ready to take the passengers coming off of the Costa Serena at 8:30 a.m. to the city for a tour before they have to board the ship again at 3:30 p.m.

In addition, police will also keep traffic under control around the cruise terminal, which is expected to be crowded with passengers.

Sokcho City plans to hold a welcome/farewell ceremony at the cruise terminal starting at 2 p.m., before the passengers leave the country.