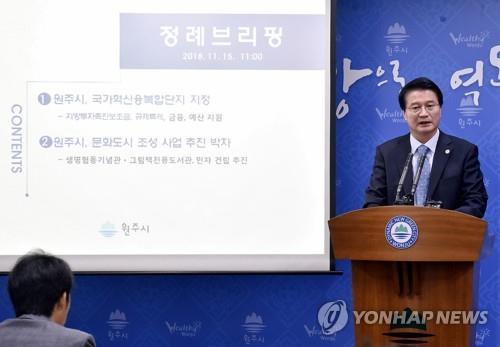 (WONJU=Yonhap News) Economy of Wonju is expected to be revitalized.

"As the area of 14 square kilometers in Wonju has been designated and announced as Gwangwon National Innovation Cluster, the region has got the green light for the overall economy," said Won Chang-muk, Mayor of Wonju. "We are expecting that it would be a turning point for the city's economy, such as attracting companies."

Korean and overseas companies moving offices to the National Innovation Cluster can be provided with incentives for 40 percent of the land purchase fee and maximum 24 percent of the facility investments.

Buron General Industrial Complex, which was invested by the city jointly with the private sector, is also expecting to be revitalized.

"I believe that transportation infrastructure such as Central line double track railway and railway connecting Yeoju and Wonju will bring benefits to the Buron Industrial Complex more than any other sites," said Mayor Won. "We will exert efforts to attract investments and create jobs by utilizing various government support programs, including incentives, exemptions for regulation and financial support."