According to a census conducted in 2016, approximately 1 out of 5 South Koreans live in Seoul, despite the city accounting for only 0.6 percent of the country’s total area. It is said that Seoul’s population density is almost twice that of New York City and approximately 182 times greater than that of Gangwon Province. Such high concentration has prompted the government to focus on developing and revitalizing new cities for balanced growth of the nation. As a result, Seoul’s population has been declining for six consecutive years and new cities nearby are enjoying new development efforts. Pyeongtaek is one of these new cities where investors are expecting tremendous growth in real estate value. Its growth potential is boosted by the Yellow Sea Free Economic Zone, U.S. Forces in Korea, industrial complexes and infrastructure development.

Located in Gyeonggi Province, about 70 kilometers south of Seoul, Pyeongtaek boasts excellent accessibility and transportation infrastructure. It is roughly 90 minutes away from Incheon International Airport, Gyeongbu Expressway, Seohaean Expressway, as well as the newly established SRT (Super Rapid Train), a high speed railway that connects Suseo and Pyeongtaek, allowing trips to the nation’s capital in just 30 minutes. It is also home to one of South Korea’s four main ports, the Pyeongtaek Port. Thanks to its strategic location, the port, acting as the northeastern trade hub, carries out important trade with China. Furthermore, the development of free economic zone is expected to boost the importance of the port in the coming years.

One of the main factors boosting the real estate value of Pyeongtaek is that it is part of the Yellow Sea Free Economic Zone (YESFEZ), which was designated in 2008. As a free economic zone, YESFEZ offers free and broader activities for resident companies and foreign investors through a plethora of incentives. The Pyeongtaek BIX (Business and Industry Complex) is one of YESFEZ’s main projects carried out by the Pyeongtaek Urban Corporation and the Gyeonggi Urban Innovation Corporation. Covering an area of 2,073,465 m2, the Pyeongtaek BIX will be developed into a high-tech industry and an international logistics complex by 2020. Moreover, the complex was designated as “2018’s Main Foreign Investment Promotion Project,” meaning it will receive KRW 140 million as well as strong support from national investment promotion agencies such as KOTRA. Foreign investors and companies are flocking to Pyeongtaek, recognizing its potential. For instance, earlier this year, Singapore’s Sumifru Corp. signed an MoU with YESFEZ to invest USD 30 million toward constructing a logistics facility at the Pyeongtaek BIX. Such actions will revitalize the local economy and increase population, which will thus boost the land value of the area.

Additionally, investments from global giants affirm Pyeongtaek as an area with tremendous growth potential. Samsung is operating the world’s biggest semiconductor plant at the Godeok Industrial Complex. The plant spans 3,950,000 m2 and provides employment for approximately 150,000 people with economic effect reaching KRW 41 trillion. The company recently announced that it is putting another KRW 30 trillion worth of investment to build additional factories by 2021. When completed, the factory is expected to create even greater economic effects. LG also constructed the “LG Digital Park” in Pyeongtaek, which is a 640,000 m2 complex that has a wide range of functions including manufacturing, R&D, quality control and education. A greater economic effect is anticipated as affiliated companies such as LG Innotech and LG CNS are also planning to move into the city.

The recent relocation of the U.S. Forces Korea (USFK) headquarters from Yongsan to Camp Humphreys in Pyeongtaek will also boost the area’s land value. Local businesses are expecting the new headquarters to bolster the local economy, as seen in the example of Itaewon, the former location of the USFK headquarters which has greatly benefitted from the inflow of foreigners. Camp Humphreys covers 240,000 m2, being the largest overseas U.S. military base. According to real estate market figures, about 43,000 U.S military forces and family members are set to move into the area by 2021.

As one of the nation’s fastest growing cities, Pyeongtaek’s population rose 9.2 percent from 5 years ago to nearly 490,000, which is a steep growth when compared with Gyeonggi-do’s overall population growth of 5.4 percent. Taking into account the recent development in the area, an even higher growth rate is projected to hit a population of 1,200,000 by 2035. Pyeongtaek’s strategic location, excellent accessibility, Free Economic Zone, industrial complexes and the relocation of the USFK all contribute to the recent surge in population and investment to city. There is no doubt that Pyeongtaek will become the next major city of South Korea. 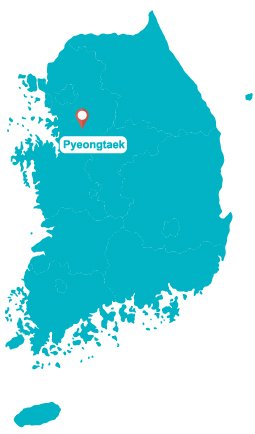