Korea's economy experienced rapid growth riding on the back of a competitive manufacturing industry, but in the recent years marked with the global economic crisis and the weakening comparative advantage of the Korean manufacturing industry, the country's economic growth rate has dipped to a mere 2-3%. In striving for economic recovery and a solution to unemployment, strengthening the competitiveness of the services industry has become a key topic of economic policy. This study seeks to analyze Korea's services industry in light of the country's distinct market features, trade status and regulatory environment to draw some implications for strengthening the competitiveness of the services industry.

Current Status and Features of the Korean Services Market

Taking a closer look at the industry by sector, distribution service sectors with low productivity, such as wholesale, retail and transportation, made up the greatest share of added value and employment. On the other hand, sectors with relatively higher productivity (specialized scientific and technical services, business support services) only made up 7.4% of the national economy. Compared to the UK (13.9%), France (12.9%), the U.S. (12.1%) and Germany (10.6%), the share of high-productivity sectors in the natinal economy remains relatively low in Korea. However, over the last decade, growth trends in distribution and consumer services have slowed, while the share of business services in the overall economy has increased.

Current Status of Trade in the Korean Services Industry

In recent years, service exports have continued to grow globally, and since 2010, service exports have contributed to total exports at significant and increasing rates. On the contrary, the contribution of the services industry to exports is lower than that of imports in Korea. Compared to the OECD average of 26.8%, Korea's services industry accounts for a remarkably low 15.3% of total exports.

The growth of trade in Korea's services industry is relatively slow, and continues to be in deficit. Looking at the 2017 trade structure in the services industry by sector, transportation, travel and construction have a high share in total exports and imports are concentrated in two sectors: transportation and travel. With the exception of construction, most sectors are in deficit, with about 50% of the overall trade deficit coming from the travel sector.

Current Status of Korea's Trade by Service Sector (as of 2017)

In recent years, opening up the services industry has emerged as a key issue in various bilateral and multilateral trade agreements with growing trade and investment in the global economy. As such, this section will provide an assessment of the regulatory environment and openness of Korea's services industry based on the OECD's Services Trade Restrictiveness Index (STRI). Although the STRI does not reflect preferential trade agreements such as free trade agreements, it does provide a relatively detailed evaluation of Korea's regulations and restrictions by service sector, and thus can serve as a key indicator for assessing Korea's regulatory environment.
Compared to the average of the 44 countries evaluated in the STRI in 2017, the overall services industry in Korea is relatively and highly open. The railway transportation and accounting service sectors were the only exceptions with high entry restrictions.

Korea's OECD STRI Index by Service Sector (as of 2017) 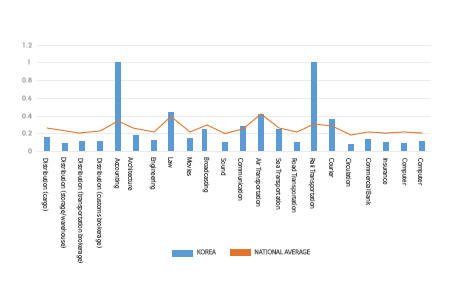 In addition, changes the STRI from 2014 to 2017 show that most of the index values have declined, signalling a gradual improvement in Korea's openness index. When compared to Japan, the U.S. and China, Korea's market entry regulations appear to be improving extensively.

The opinions expressed in this article are the author’s own and do not reflect the views of KOTRA
Meta information
List
Loading...