In April 2019, Korea became the first in the world to roll out 5G services. With six months passing from the launch, it is timely to reflect on the status of the services in Korea while exploring how 5G is transforming the lives and society of the Korean people.

Personal services were launched on April 3, 2019, using a smartphone-type terminal (Samsung Galaxy S10) in the form of 5G/LTE Non-Stand Alone (NSA) on 3.5GHz. This service was released focusing on big cities. The government and service providers are expanding coverage with the target of providing 5G services using 3.5 GHz NSA in 84 major cities by the end of 2019. The “coverage of 84 major cities” is equivalent to the coverage of 93 percent of Korea’s population. The target for 2020 is to establish full coverage in the nation, and to launch 5G Stand-Alone (SA) services and 28GHz services.

The number of 5G subscribers has been on a rapid rise thanks to aggressive marketing by service providers, larger volumes of data such as unlimited data option, rapid transfer speed, and the rising popularity of new services such as AR/VR. According to a press report on August 22, the number of 5G subscribers reached 2.45 million as of August-end, and is likely to surpass the 4 million mark within this year. When it comes to smartphone models, S10, Note10, and A90 by Samsung and V50ThinQ by LG Electronics are available. Compared to LTE, the pace of increase in the number of subscribers is much faster. It took 69 days to pass the 1 million subscriber mark for 5G, compared to 81 days for LTE.

With the commercialization of 5G, data usage also shot up. According to KT’s announcement in May, the average monthly data usage by LTE users was only 9.5 GB, while it was 22.3 GB by 5G users.

Video and music streaming services have continued to expand in line with the development of 5G. SKT is in the process of integrating its Over-the-Top (OTT) service, called “Oksusu,” with broadcasters’ OTT service called “POOQ.” Meanwhile, KT and LGU+ are also stepping up their streaming services.

Domestic carriers are also strengthening high-resolution contents including VR and 4K to strongly appeal the high-speed communications feature of 5G. Three mobile carriers are providing videos of K-Pop stars’ performances and music, major tourist destinations, movies and sports in 4K resolution. Through the VR service, users can zoom into the parts of videos they want without compromising resolution. For instance, a user can zoom into his/her favorite member of an idol group during the group’s performance. Furthermore, users can watch vivid moments of an idol group’s dance rendition from various angles through 360 VR video. This type of video can be enjoyed through smartphones or dedicated VR devices.

In addition, VR video services allow users to watch sports broadcasting including baseball and eSports, etc. in a more realistic way. For instance, cameras film the moves at various positions (pitcher, catcher, 1st base, 2nd base, 3rd base, etc.) during a professional baseball game and can simultaneously broadcast the videos. In doing so, users can enjoy videos on any of those positions at any time. These types of services transform the way people enjoy broadcasts on golf, marathons and other sports, as users can select the player they want from the entire course. They can also view any plays of the athletes through 360 VR video, watching and analyzing the plays from multiple angles.

The number of AR service users increases in line with the spread of 5G. Mobile carriers are providing call services featuring various avatars, AR emoticker, and beauty functions in existing video calls. Users can also watch dance performances of idol groups from all angles. They can even superimpose idol star’s dance performance filmed from 360 degrees on the screen in which his/her own dancing is filmed. With this AR service, users can practice dances by mimicking the idol’s movements or exercise at home by watching professional trainers’ videos.

High-speed, high-quality 5G data services are also transforming the way people enjoy games. For a streaming game, which interactively controls the screen operated on cloud without downloading a program, the high-speed and low-latency features of 5G are essential. Game users can enjoy various games, not only games developed for smartphones but also for PCs, at any time. Also, they can enjoy a game on all devices seamlessly, e.g., smartphone, TV, PC, and game console. For a game provider, it becomes possible to provide games in a stable manner without fear of hacking attacks onto users’ game devices. Three service providers launched their own streaming games. For instance, LGU+ plans to launch the GeForce NOW streaming game, while Google Stadia service is also in the pipeline. AR and VR games are also booming. Three mobile providers are preparing to launch VR games such as Harry Potter and Gun Jack. Games of new genres including multi-ending VR—which integrates movies and games —based on 5G’s high-speed and low-latency are under development.

5G was developed to satisfy the demands from various industries including automobiles, factory, energy, medical, disaster safety, and cities. New functions and performance of 5G will act as a stimulus to advance the level of industries and accelerate the Fourth Industrial Revolution underway worldwide.

The 5G Forum is a body that pursues the facilitation of 5G through private-public-research cooperation, discussing strategies, technologies, business models and policy directions for 5G industry convergence, as well as giving advice to the government. The Forum also acts as a think tank by utilizing experts through: industry convergence committees in smart factory, transport convergence, smart city; and specialty committees in technology, service, ecosystem, and frequency. In particular, the ecosystem strategy committee is playing an important role in establishing and stimulating the ecosystem of the industry, while conducting various activities to expand business opportunities of SMEs and startups through 5G.

Prior to implementing the 5G+ strategy, the services available through 5G industry convergence have been demonstrated through the Giga Korea project run by the government. The Giga Korea Project—having been through the first phase-which targeted development of high-tech media services including AR/VR and demonstration at the 2018 Pyeongchang Winter Olympics—is currently conducting demonstration project of 5G industry convergence. Major application areas consist of factory, automobile, city, public safety and media. The outcomes of development are expected to be applied in implementation of the 5G+ strategy. Services under development through each demonstration are as follows.

When it comes to smart city, public safety services using intelligent CCTV and numerous sensors of massive Machine-Type Communications (mMTC), and public safety service utilizing drones have been demonstrated. As these services require comprehensive data sharing and services integration, the development of the platform to support smart city inevitably follows.

In disaster safety areas, technologies to support effective rescue activities in buildings or tunnels on fire are being developed. More specifically, various sensors, high-precision indoor positioning, 360-degree camera as a wearable device for rescue workers to picture situations on site are included. In particular, cyber-physical system technologies, which relates the database of building information with various video information collected from an IP camera, wearable camera and drone camera integrated with various sensor data are under development as well. By using such technologies, it is expected to comprehensively understand the data collected through various means and find out the locations and situations of those in need of rescue.

With regard to media services, the following are in progress: 8K 360-degree camera, the technology stitching multiple media sources, VR device based on brainwave/heart rate sensor, interactive smart signage service technologies, which all advance existing media services, and the development of hyper reality games based on 360-degree 4K video.

Besides the government-led 5G+ strategy and the Giga Korea project, private companies are actively progressing with 5G industry convergence. For instance, SKT, in cooperation with local governments, is carrying out demonstration of C-ITS project in Seoul, while KT is doing the same in Jeju Island. Three mobile carriers are all in the process of integrating self-driving with 5G, demonstrating their technologies on Gyeongbu highway, in Sangam-dong, and in Zero City of Pangyo. For mobile carriers, dynamic HD 3D maps are essential for self-driving. So they have been developing relevant technologies and succeeded in demonstration. Regarding C-ITS as a safety-related service, development and verification of technologies through demonstration projects is underway. However, some projects using big data from advanced driver assistance systems (ADAS) have already been in use. Case in point is the reduction of traffic accidents by analyzing the type of traffic accidents, and cutting insurance premiums by analyzing the driving type of individual drivers.

When it comes to factory, KT is in the process of a smart shipbuilding project by applying 5G to shipyards of Hyundai Heavy Industries. LGU+ is pushing for smart factory applying 5G in cooperation with LG Electronics. SKT is building an ecosystem by actively taking advantage of smart factory demonstration project under the Giga Korea project. There are efforts to apply 5G to smart city projects as well. For smart cities in progress in Busan and Sejong, 5G Forum and Busan/Sejong Smart City Councils are cooperating to discuss 5G application cases. Meanwhile, SKT is already working with 5G test-operations of smart offices and smart military. 5) .

In the process of 5G industry convergence, various new services and business models based on new ideas are likely to generate further innovation. In this context, it is necessary to cultivate an environment in which SMEs and startups can easily utilize 5G technologies and the network environment to help them spur innovation. To do so, the government and mobile carriers have expanded the infrastructure to nurture industries in more innovative ways by: establishing numerous innovation labs to provide 5G network for test purpose; supporting a dedicated test environment for factories through Smart Manufacturing Innovation Center (SMIC); and providing a dedicated test environment for automobiles through K-city. 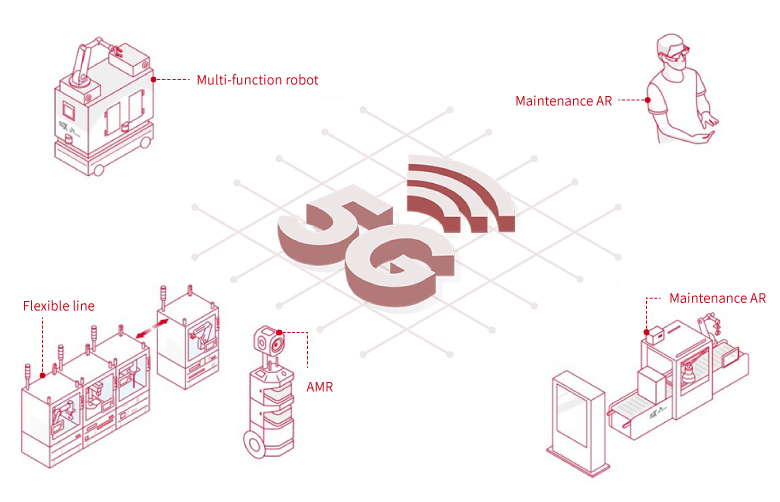 5G commercialization and 5G application in industries in the past few months have confirmed that the improvement of people’s life standards and the acceleration of the 4th Industrial Revolution through 5G industry convergence are critical in improving people’s wellbeing and national competitiveness. The spread of 5G at the national level and the convergence of 5G and industries will continue to expand. Throughout the process, the 5G+ strategy is likely to play a crucial role. International cooperation is deemed necessary to ensure the diversity of 5G services and economy of scale when applying 5G in various industries.

< **The opinions expressed in this article are the author’s own and do not reflect the views of KOTRA. >