With the unprecedentedly fast-growing market and their multitude of new technological use cases, drones, also known an unmanned aerial vehicles (UAVs), are now used in various walks of our lives. The origin of today’s UAVs in Korea dates back to the 1990s when military aircraft with no on-board crews was piloted solely to spy on and reconnoiter enemies. With soaring demand for UAVs in broadcasting and recreational use since then, the broad range of commercial applications such as disaster prevention have risen with years passing by. UAVs have been of social and economic benefit to daily life, being used for a large variety of applications so far since its early development. Meanwhile, the constantly changing world of UAV technologies which crisscross with other industrial segments are now predicted to transform the dynamic of aviation and aerospace business, leading the upcoming era of the fourth industrial revolution.

The UAV market in Korea, though, is still said to trail somewhat behind China in price competitiveness and technology. Plus, nearly nine out of ten enterprise drones in service in Korea were found to be outsourced from countries like China. Further surprisingly, over 90 percent of miniature UAVs supplied in Korea (net weight ≤12kg or maximum takeoff weight ≤25kg) manufactured for toys or personal tools, are presumed to come from overseas markets. At a conservative estimate, which takes unreported cases of international orders and deliveries into account, the number may go far beyond the official data. The figures imply that an overwhelming reliance on imports makes it harder for most drone makers in Korea to scale up and stay ahead of technologies, even though they’re fully aware that the potential for UAV market growth in commercial use is extensive. 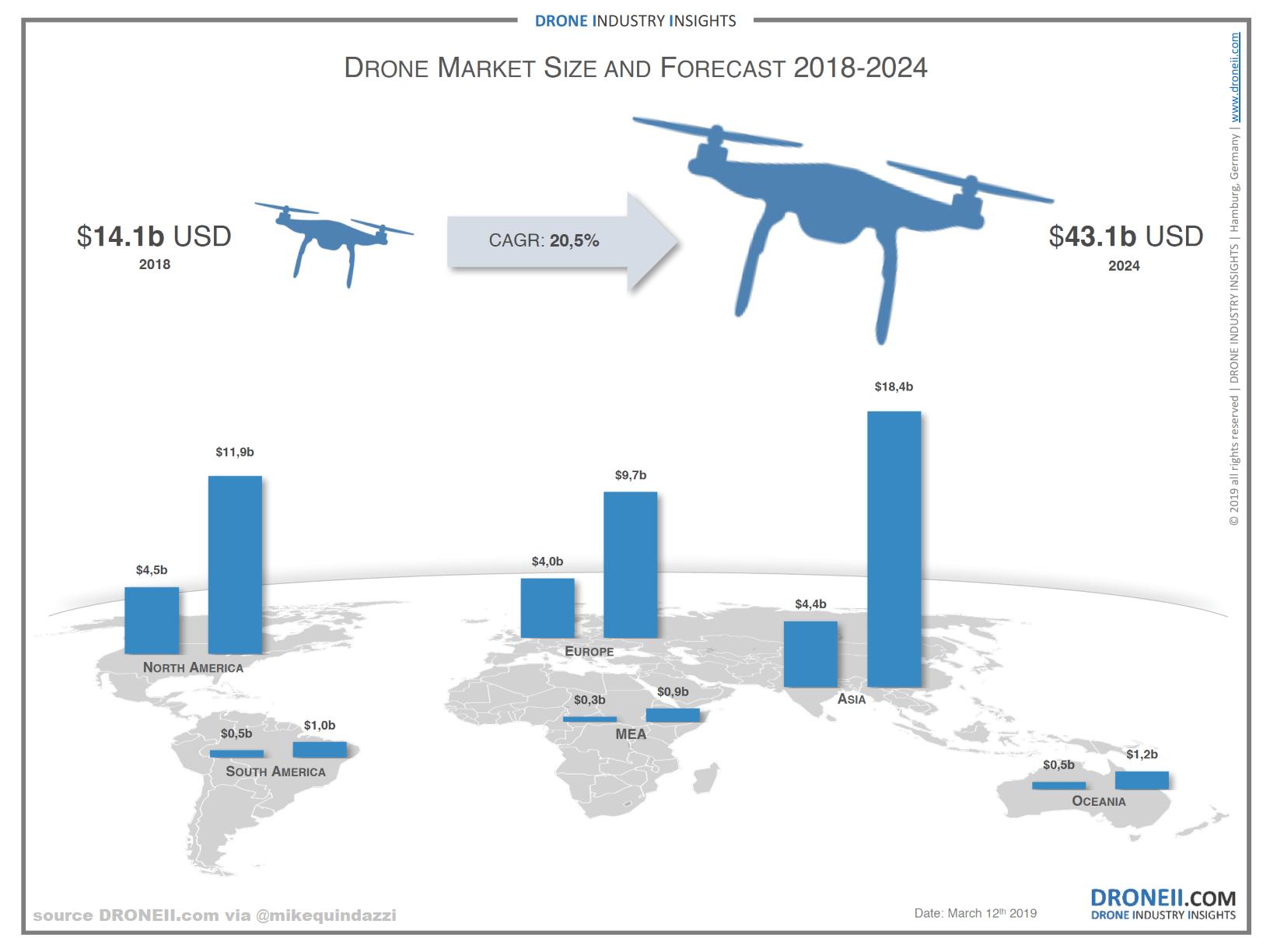 With various forms of government efforts to make the industry thrive, many hurdles that UAV businesses in Korea are confronting in the competition with their biggest rivals in China, lay ahead.

Here are some of the key trends and forecasts for better understanding of the market. Above all things, the government’s policy direction for business growth needs to be taken into consideration as those acting as a key operators in control of the industry in Korea are split off into three separate bodies: the Ministry of Land, Infrastructure and Transport (MLIT), Ministry of Science and ICT (MSI) and Ministry of Trade, Industry and Energy (MOTIE).

The ICT ministry, the primary agency commissioned to lead the next generation UAV technology in Korea, rolled out its seven year investment plan to finance as much as KRW 170.3 billion in total by the year 2026, in an attempt to fill the tech skills gap (64.4 out of 100) and to help push drone market growth forward, adding to a long term plan to encourage businesses to advance home grown source technologies, through which they find greater business opportunities and secure market dominance in advance.

The second topic is about industry trends. There is no arguing, that the UAV industry will become the next game changer, dividing winners and losers in the future tech world. Unfortunately, most drone makers in Korea, still remaining in unfledged stage, keep producing cheap, shoddy goods lacking technological resources on one hand, while cash-rich large companies such as LG, Hanwha Corporation, Doosan, Hyundai Motors, Hancom MDS Inc., and several others on the other hand are cautious of breaking into the market for the reasons of the current UAV business climate, which falls far short of technological and commercial capabilities.

Some of major corporations have started to move to gain market ground, nevertheless. Korean Air (KAL) has long funded unmanned aircraft technologies developed for military and enterprise uses since the late 1990s. They’ve begun to mass produce UAV systems for surveillance and reconnaissance since 2015 and set out aims to make vertical take-off and landing (VTOL) UAVs commercially valid this year.

Such entrepreneurship deserves to be greatly appreciated, but can’t be said that it’s enough. Now is the perfect time to spur the industry growth that occurs across industrial segments and human resources in different domains. The adoption of drone technology across the board would be part of the ways to bring out new business models and be expansive. Constant support with extraordinary care to source a wealthy of capable talents, not only in Korea but other countries, must be accompanied as well.

Lastly, it’s about business outlook. The technological or commercial potential with drones is immense with burgeoning demand for the new use cases from energy, logistics, construction, agriculture, transportation and infrastructure to content creation for recreational uses, 3D mapping, aerial inspection services and data gathering. There’s no doubt that they all provide opportunities that businesses engaged need to take note of. It’s not too early to start with what Korea is gaining the upper hand in as UAV solutions and required technologies such as telecommunications, software platform and component designing remain in the early development stage. The UAV industry has just started to take baby steps towards a full-fledged business. If Korea makes bold investments into helping the market create a new model by capitalizing on industry convergence, the drone industry is believed to take off. .

< The opinions expressed in this article are the author’s own and do not reflect the views of KOTRA. >