The aerospace industry largely encompasses markets in the space and aviation subsectors which produce aircrafts, flight vehicles, individual parts and materials to make primary products. The industry is tech-intensive and incorporates a broad spectrum of technological applications in aerospace, physics, mathematical, mechanical, material, electrical, telecommunications and software engineering. It also has a profound influence that ripples through other industrial sectors like automobile, electronics and medical business.

The industry has so far put most of its emphasis on advances in technology. Yet the radically changing industry landscape and unprecedented business model innovation triggered by the recent COVID-19 outbreak and Industry 4.0 have brought tectonic shifts to the entire aerospace sector. Encountering the abrupt wave of business transformation, S. Korea is striving to gain agility to quickly respond to shifting market trends.


The Aerospace Industry in S. Korea

S. Korea’s commercial aviation sector which somewhat stalled in 2017 after it had shown strong growth at 28.3 percent in sales in 2015, has recently bounced back from 2018.
Other subsectors, providing products and services to space markets, has been on an upward trajectory since 2013, but now remains a bit stagnant.
The trade volume of the combined subsectors of the industry amounted to KRW 6 billion in 2019, a 7 percent jump compared to the previous year.
To be sure, the trade value is relatively insignificant compared to that of the world’s superpowers in the aerospace industry. That said, the growth that S. Korea has attained so far, however, is attributed to intense support primarily focused on investments in technologies to close the gap between countries at the top of the global tech race. An index which demonstrates the technology prowess level and gap between nations shows S. Korea at 60.9 percent (U.S. 100%), which signifies that the tech-divide between Korea and the U.S. is not so as big as the discrepancies in trade (S. Korea: 3.2%, U.S.: 100%). 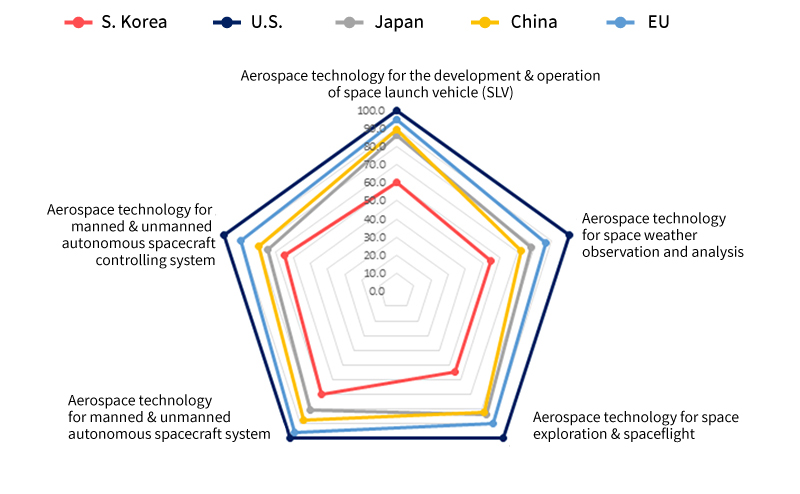 These numbers imply how much the private sector businesses in S. Korea have committed to investment in aerospace R&D thus far. Companies in the commercial aviation sector as of 2018 poured nearly 36 percent and 32 percent of spending into research work and manufacturing facilities respectively. Investments in space projects have consistently increased by over 80 percent. (2016: 81%, 2017: 89%, 2018: 84%)

On top of that, a series of successive launches of the geostationary satellite used to monitor the space weather and climate of the earth (2018-2019), and a 75-ton thrust liquid-fueled rocket engine mounted on prototype vehicles developed by the Korea Aerospace Research Institute (KARI), a government-funded research center specializing in aerospace engineering, have helped get the most out of the industry’s resources and related infrastructure.

With a market prospect betting on explosive growth in the UAM business, the Korea Institute of S&T Evaluation and Planning (KISTEP) recently transferred scientific research over personal VTOL aircraft along with the associated skills they have acquired for years to Hyundai Motor Group, which helped the Korean automaker take its first step into the aviation industry. Such industry-academia collaboration is highly anticipated to encourage private enterprises in different segments to drive engagement, consequentially bringing a positive domino effect to the economy at large.

Since its first emergence identified late last year, COVID-19 has soon spread across the entire world, becoming the global health crisis of our time. The pandemic-induced recession resulted in a deadly economic downturn, causing breakdowns of the global supply chain and disruptions in the world economy. The fallout from the crisis brought a nosedive in air passenger demand (36%↓ yoy), while accelerating the transition to a digital future and the development of contact-free services. Such market reactions that arose in the midst of COVID-19 appear to have a tremendous effect on the aerospace industry as a whole.

Putting the public health challenge ahead of us aside, the world has begun to appreciate greener (and more sustainable) technologies. By unfolding environmental initiatives, each country has committed to a net zero emissions target, seeking available solutions to cut the amount of hazardous substances discharged into the environment. The European Union proposed de-carbonization pathways to a net greenhouse gas (GHG) emissions reduction target by 2050. Under such goals, all member states are required to alter the traditional business practices to reach climate neutrality.

S. Korea recently announced the authority-led environment plan, known as the Green New Deal. With its objectives to add new jobs, while moving to a greener economy, the country launched a package of policies that involve turning industry infrastructure environmentally sustainable, relying more on cleaner energy sources and investing more in green business.

To be in line with the transition to green economy, research on developing commercially viable technologies of hybrid-electric powered aircrafts is currently underway among tech-startups and private sector businesses.

As public health concerns and the demand for environmental sustainability are growing, the industry is increasingly turning into the technologies of electric Vertical Take-off & Landing (eVTOL) urban air mobility (UAM), a contact-free, green alternative of the future aviation industry. The advent of this new technology is now heating up the global market competition among developers who wish to expand their market presence in advance.

S. Korea is one of them, joining the race to seize the next wave of opportunities. With detailed goals that entail the enactment of a proper legislative framework for safe driving; development of a business environment to further enhance capabilities; and the formation of a sustainable business ecosystem, the Korean government has recently rolled out a roadmap on how to harness UAM technologies as an innovative urban mobility solution and a future growth driver.

For decades, space exploration and development has been the domain of large corporations and governments who are able to fund big science projects, but more private companies nowadays are unlocking the opportunities and increasingly taking a plunge into the new space race.
Facing the altering trends, the space industry sees new private actors (and their investors) driving the age of the commercial space economy based on the entrepreneurial activity model.

In Korea, mobile-satellite communications antenna makers; startups developing technologies for satellite and launcher miniaturization; and entrepreneurs manufacturing commercial satellite launch vehicles with hybrid rocket propulsion systems are the non-governmental entities jumping into the fray in the private aerospace business. Meanwhile, the authorities in S. Korea set out a space development strategy that allows transition to private sector involvement from what is only accessible to the public domain, while the space entrepreneurs are making their way into the commercial space economy.

As we are on the brink of a new space age, today’s dynamic global business climate has brought the aerospace industry to a watershed moment. In this ever-changing environment, hundreds of Korean research institutes and companies, small or large, have engaged with the government-led space projects and endeavored to tap into the next economic frontier. Hopefully, growing private-public partnerships can help Korea take a grand leap forward and improve its capabilities in space technology in the forthcoming future.