[ICT] Strengthening Korea’s Position as a Manufacturing Powerhouse through the Introduction of Smart Factories
Date
2021.03.04
Views
2255

Korea is undoubtedly a manufacturing and exporting powerhouse. According to the statistics published by Korea Employment Information Service, as of December 2020, approximately 349,000 active manufacturers are producing materials, parts, modules, finished products and equipment in Korea.


A “smart factory” refers to a business with an intelligent production system that actively utilizes artificial intelligence optimization solutions based on big data collected through sensors and IoT throughout the entire manufacturing process of product planning-design-production-distribution. The ultimate goal of a smart factory is to create value through production efficiency and market expansion in the manufacturing industry by comprehensively utilizing cutting-edge digital technology, which embodies the essence of the fourth industrial revolution being eagerly pursued both in the public and private sectors. Korea, which ranks first in digital infrastructure and fifth in manufacturing competitiveness, is clearly a country that offers the best environment for implementing such smart factories.


▶ What is a smart factory?

The Smart Manufacturing Innovation Center of the Korean government defines a smart factory as “a high-tech, human-centered factory that integrates all production processes from product planning to sales with ICT technology to produce customized products with minimal cost and time.”

In the traditional manufacturing process, it often occurs that the order of the process is tangled, essential raw materials or parts run out, or any broken equipment is not timely fixed, resulting in production delays, and, of course, a waste of time and money. All of these problems can be fixed through AI-based optimization. In a virtual space described as a “digital twin,” you can simulate the production process of a new product and check where and how the problem occurs, considerably reduce defect rates through real-time exchange of information among equipment, materials, and systems, and have the system automatically place and receive orders upon the completion of a production process, which has the side benefit of reducing inventory costs.

The benefits of the introduction of smart factories go far further than merely saving costs and increasing production speed. The use of big data enables reliable measurement of whether and how much demand exists for a new product and small quantity batch production through detailed customization for customers.

However, the survey results also showed that the smart manufacturing system has failed to produce such effects as technology development, increase in the number of product items, or increase in the number of suppliers. This indicates that while process innovation through optimization in the product production phase has been achieved relatively easily, the smart factory system has fallen short of expectations in terms of product innovation such as marketing, customer-tailored product development, and technology innovation.


▶ Use of smart manufacturing solutions is still limited in Korea

According to another 2019 survey2 conducted by the Korea Institute for Industrial Economics and Trade for the analysis of suppliers that provide smart manufacturing solutions in Korea, most of the suppliers of smart manufacturing solutions in Korea are MES and ERP suppliers, and the percentage of equipment manufacturers that produce only a single item of part or component is high. At present, Korean manufacturers depend highly on U.S. products for software such as AR, VR, CPS, and manufacturing robots, and on products imported from Japan, Germany and China for parts such as autonomous transport robots and smart sensors.

* Source: Ministry of Trade, Industry and Energy, “Introduction of the Policy on Smart Industrial Complexes” 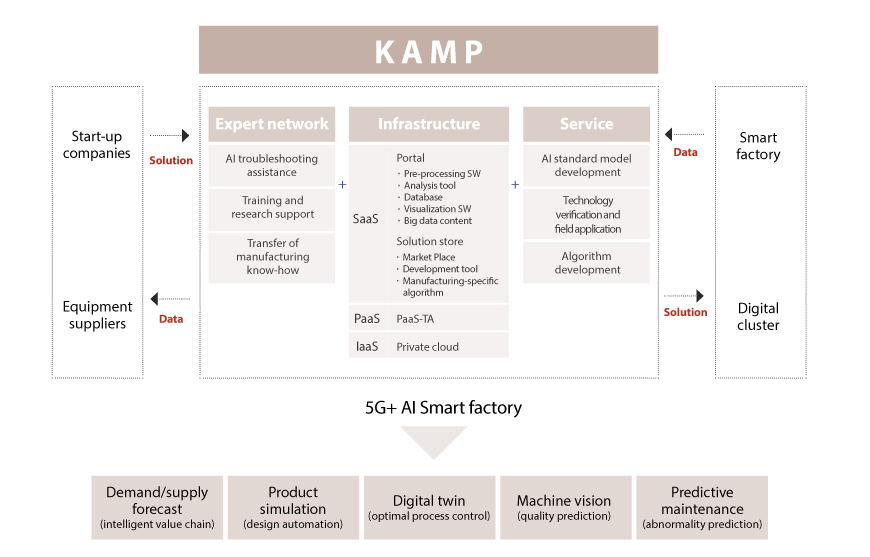 In July 2020, the Korean government announced the SMB Manufacturing Innovation Advancement Strategy based on AI and Big Data, which includes the Knowledge and Awareness Mapping Platform (KAMP). The KAMP is squarely aimed at the field of product innovation where smart factories in Korea have produced less-than-expected results. The goal is to spread the leading examples of manufacturing innovation through the development and innovation of new products based on artificial intelligence by establishing the My Manufacturing Data System, and, accordingly, the demand for smart platforms such as facilities, software, parts, and finished products is expected to increase. Korean SMBs with plans to introduce smart factories can receive various support, including, but not limited to, subsidization of the costs for the new construction of smart factories, AI consulting, technology verification, skilled workers, as well as R&D subsidies, through policy programs such as “Smart Factory Construction and Advancement,” “Data Infrastructure Construction Project,” “Smart Meister,” and “Process and Quality Technology Development.”

Encouraged by the Korean government’s active move to support the expansion of smart factories, German companies such as SAP, Siemens, Bosch, and Pesto, Rockwell Automation of the U.S., and Mitsubishi Electric of Japan are actively promoting digital factory solutions and expanding their business in Korea. Successful introduction of smart factories will not only increase profits through cost reduction, but will also make work environments safer and create quality jobs. Smart factory is different from mere automation, which just replaces repetitive labor without any improvement of productivity. It pursues new business opportunities, new demand, stronger product competitiveness and more efficient production, which is why it is a labor-friendly innovation strategy that will result in improving both the quantity and quality of jobs. We can expect that the key ministries and agencies of the Korean government will continue to make well-coordinated efforts for the success of the Smart Industrial Complex Project, which will also lay the foundation for the success of balanced regional development and smart cities.

< The opinions expressed in this article are the author’s own and do not reflect the views of KOTRA.  >