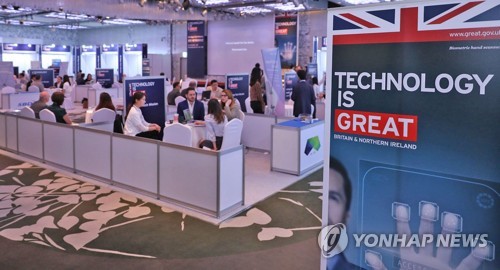 KOTRA participated in the UK Mega Tech Mission held in Seoul for the two days starting May 29, under the theme "Technology Is Great" to further enhance the cooperative relationship between Korean and British ICT companies. Representatives of some 40 U.K.-based companies involved in IoT, AI, VR, security, and other fields that will lead in the 4th industrial revolution visited Seoul for the occasion organized by the British Embassy in Korea, and attended various networking events including business consulting sessions with Korean firms.

In his opening speech, Kim Yong Kook, head of KOTRA's investment promotion arm Invest KOREA (IK), emphasized, "the Mega Tech Mission event will take the cooperation between Korea and the United Kingdom to the next level," adding, "if the birthplace of the first industrial revolution and global ICT power continue to work together, the two countries will surely be able to go far beyond the current limits of innovation and creativity." Meanwhile, Executive Consultant Kim Su Cheol and Deputy Director Kim Heekyung of IK's Europe Investment Promotion Team met with representative of five companies from the U.K. and explained the investment environment in Korea.