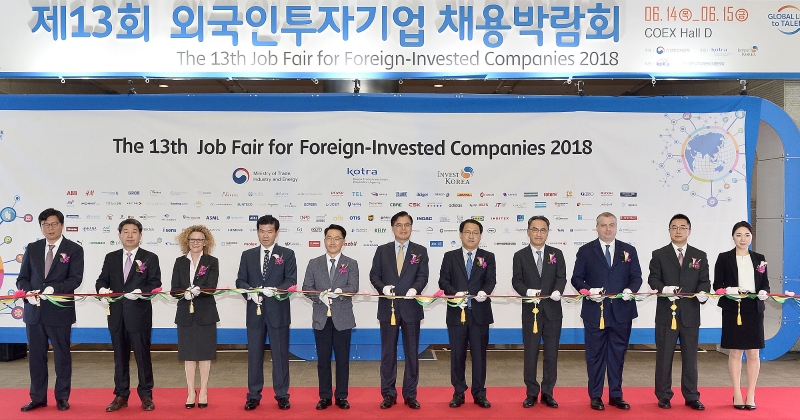 The Ministry of Trade, Industry and Energy and KOTRA host the 13th Job Fair for Foreign-Invested Companies
The participating 139 global firms including Siemens and 3M Korea plan to hire 1,000 Korean Youth

“I wanted to work in a global company because I have a lot of interest in foreign languages, and last year's job fair was extremely helpful as it allowed me to get a better understanding of the job requirements and qualifications of the company I was interested in. The company I work for now has many foreign workers, so we communicate mostly in English. We also have flexible working hours and an environment where we can talk freekt about our ideas. Overall, I'm satisfied with my new job.”

Job fair attendee "K" was hired by French company Bluebell Korea at the end of last year as an intern and became a full-time employee after 3 months. Based on personal experiences, K recommends job-seekers to take full advantage of the job fair for foreign-invested companies. .

The 13th Job Fair for Foreign-Invested Companies hosted by the Ministry of Trade, Industry and Energy (MOTIE; Minister Un Gyu Paik) and overseeen by the Korea Trade-Investment Promotion Agency (KOTRA; President and CEO Kwon Pyung-oh) will be held from June 14 to 15 at COEX in Samsung-dong, Seoul.

Since 2006, the annual job fair has provided foreign-invested firms the opportunity to promote their companies and recruit outstanding talent, and given job-seekers employment opportunities in global firms. This year's event features on-site employment consultations with HR representatives as well as 1 on 1 interviews, recruitment sessions and career seminars.

This year, 139 companies will particiipate, making it the largest fair in the event's history. Participating global firms include 22 Fortune 500 companies such as Siemens and 3M Korea, that will meet with over 14,000 job-seekers over the two days.

There is also an especially diverse range of companies job-seekers can explore this year in terms of industry and country of origin. Global companies include 61 European, 35 North American and 31 Japanese firms. By industry, there are 58 manfacturing companies including automotive parts and petrochemicals, 31 services companies including management consulting and engineering as well as 27 sales and distribution companies.

The 139 participating firms revealed plans to hire 1,034 new employees, which is twice the reported amount last year. Taking into consideration the high employment rate of the companies, MOTIE and KOTRA doubled the size of the 1 on 1 interview hall to increase the recruiment rate of the job fair.
* The number of employees the companies plan to hire is a total of the numbers provided by each company and is subject to change depending on the company's internal circumstances

KOTRA will continue its efforts to create jobs for Korean youth through the Busan Job Fair for Foreign-Invested Companies on June 27, as well as the Invest Korea Week coming up in November.

KOTRA President and CEO Kwon Pyung-oh attended the opening cermony for the job fair and stated, “The number of registered foreign-invested firms in Korea is 17,000, which is only 2.7% of all companies in Korea. However, the companies are not only responsible for 5.7% of total employment, but provide quality jobs with high pay and benefits that are highly sought after by Korean youth.”He went on to add, “We will work to create 16,000 new jobs this year through job fairs, strengthening support for the recruitment activities of foreign-invested firms and securing foreign investments that can lead to the creation of new jobs.