Korea and China to Seek for a New Growth Engine through Investment Cooperation
Date
2018.08.30
Views
963 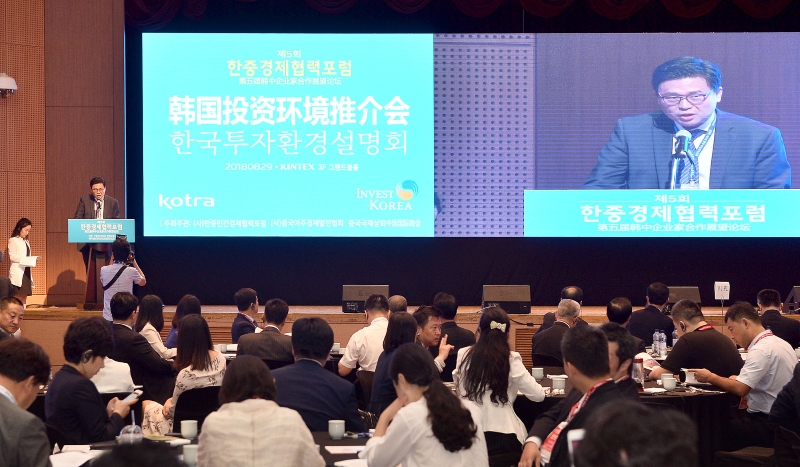 The Korea Trade-Investment Promotion Agency (KOTRA) co-hosted the Korea Investment Forum with the Korea-China Private Economic Association, and the China-Asia Economic Development Association (CAEDA) in conjunction with the Fifth Korea-China Economic Cooperation Forum on August 29 at KINTEX in Goyang City, Gyeonggi Province. Attended by 160 people from Chinese firms, the forum was organized to strengthen investment cooperation between the two countries through the advancement of industries based on the "Made in China 2025" plan, and the momentum to recover China's investment to Korea.

By and large,the quality of China's industries have been upgraded on the back of the "Made in China 2025" plan, leading to increased opportunities for investment cooperation in new growth industries, such as bio and robot technology.

At the Forum, KOTRA introduced new business opportunities, Korea's investment environment and success cases of businesses already invested in Korea. The Forum served as a platform for strengthening investment cooperation between the two countries, particularly in the new growth industries.

"Taking this opportunity, we will strengthen support to attract win-win investments for both countries by focusing on the newly rising demand for investment cooperation in areas like ICT, robot technology and fintech," said Yong Kook Kim, Head of Invest KOREA.