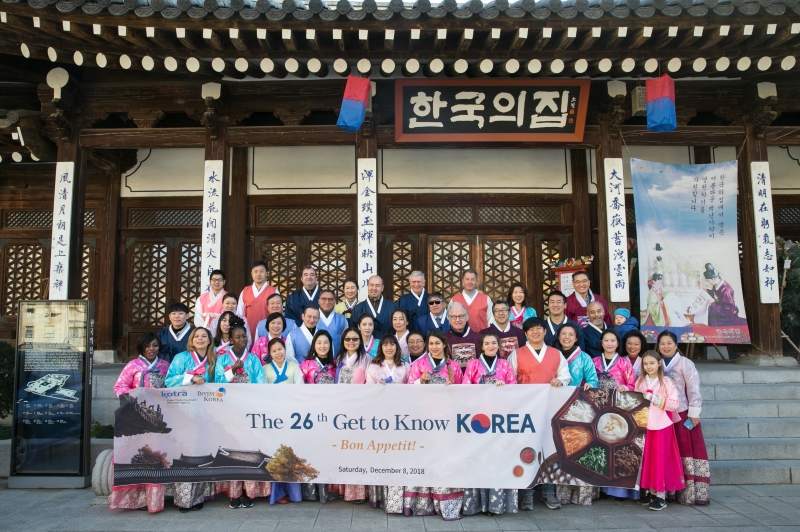 On December 8th, the Korea Trade-Investment Promotion Agency (KOTRA) hosted the "26th Get to Know KOREA," a promotional event for foreign investors in Korea, at Korea House in Chungmuro, Seoul and Namsangol Hanok Village. The event has been held since 2008 to promote the understanding of Korea's culture by foreigners in Korea, including executives and staff members of foreign-invested companies.

A total of 50 participants attended the event, including staff members of foreign-invested companies such as Bosch Korea, Solvay Korea, journalists from the foreign press such as the New York Times, as well as foreign diplomats and their families.

At the experience hall of the Korea House, participants had the opportunity to make Korean food and eat what they had made, namely, a dish called Gujeolpan. It served as an invaluable experience for participants to learn about traditional Korean cuisine they could only enjoy at Korean restaurants and to experience the uniqueness of Korean culture. Next, they visited Namsangol Hanok Village and enjoyed seeing the cultural heritage of Hanok, for example, a nobility's house from the Joseon Dynasty.

Chang Sang Hyun, Head of Invest KOREA, said, "Get to Know KOREA celebrates its 10th anniversary this year, and has played a vital role in promoting foreigners' understanding of Korea by giving them a hands-on experience of Korea's culture and history." He added, "As a stable and attractive investment destination, KOTRA will continue to make efforts in various ways to raise positive awareness of Korea."